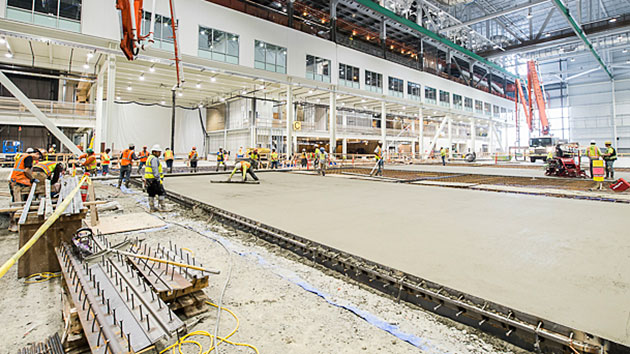 The Composite Wing Center (CWC) to support 777X production in Everett is one area of Boeing’s investment in Washington. This massive construction project employs up to 1,500 workers on site every day.

How much is a single company worth to people living in Washington? If the company is Boeing and the year is 2015, there is now an answer to that question: $13 billion dollars.

Boeing just released the number which reflects the value Washington residents receive from Boeing’s presence in the state.

The bulk of Boeing’s investment is composed of billions of dollars of expenditures for payroll, supplier purchases and capital investments in Washington. It also includes hundreds of millions of dollars Boeing spent in Washington for taxes, and more than $40 million in community contributions, as well as more than $30 million towards employee continuing-education tuition, which includes four-year bachelors and masters’ degrees.

The numbers illustrate the correlation between Washington’s aerospace tax incentives and the amount of money that Boeing pumps into the state’s economy. They represent not only Boeing’s current, robust presence in Washington, but the sizable capital investments the company makes as it develops the 777X and 737 MAX programs, as well as other capabilities around the company.

As a result of the investments, Boeing reported $305 million in savings in 2015 via the Washington aerospace tax incentives, according to the newly released figures. More than 470 Washington companies use the incentives.

“This is a good news story,” said Bill McSherry, vice president of Government Relations and Global Corporate Citizenship, Commercial Airplanes. “The more Boeing invests in Washington, the higher the stated value of the incentives.”

“Within the billions Boeing invested here last year, are hundreds of millions of dollars in taxes paid to the state and local governments in Washington,” McSherry adds. “We believe Boeing is the largest taxpayer in Washington, by a long shot.”

The aerospace tax incentives are structured so that as Boeing invests more in Washington, the stated value of the incentives increases, he said.

When the state passed the 2003 Aerospace Tax Incentives, legislators noted the need to make Washington cost competitive. The 2003 law states the incentives “…address the cost of doing business in Washington state compared to locations in other states.”

Even as Boeing takes diligent steps to manage and reduce costs in an increasingly competitive global market, the value of the company's ongoing operations and future development in Washington remain foundational to the state’s economy.

The value is further multiplied by the investments made throughout Boeing’s supply chain, the money spent by Boeing employees and the work performed by Boeing’s charitable partners in the community.

“Washington made an excellent business decision when it enacted these incentives,” said McSherry. “Boeing’s investments demonstrate that when a state creates competitive policies, its citizens reap tremendous benefits from the economic activity that follows. These incentives work.”