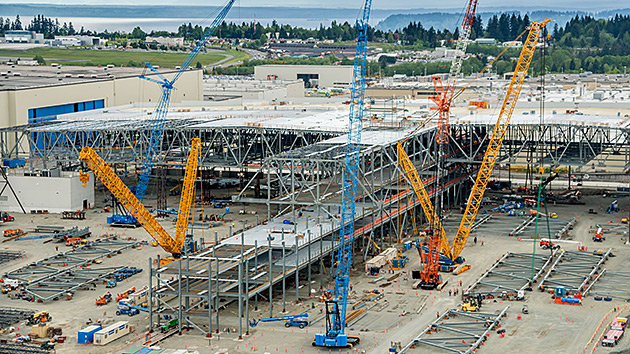 The Composite Wing Center (CWC), a cornerstone of 777X production in Everett, is one of Boeing’s largest investments in Washington state. The massive project, seen here under construction last year, employs up to 1,500 construction workers every day.

People who live in Washington state have likely seen a recent burst of coverage in local news media following Boeing’s tax filing to the state Department of Revenue (DOR) this week. What has been lost in much of this coverage, Boeing leaders said, is that the company invested more than $13 billion in Washington in 2015.

As a result of those investments, Boeing reported $305 million in savings last year through the state’s aerospace tax incentive law. The law was designed so there is a direct and constant connection between the amount invested and the amount saved. Boeing invested more than any other company, so its savings will also top the list. If others invested more, they would see their savings rise.

This is a complex issue. Here are five important facts to know about Boeing's tax filing:

State Sen. Reuven Carlyle (D-Seattle) recently wrote on his blog: “Today we are able to learn firsthand with hard data that the deal Washington taxpayers struck with The Boeing Company is, in fact, a win-win."

(2)  Invest more, save more.
Washington’s aerospace tax incentives are structured so that the more a company invests in the state, the more that company saves in taxes. The $305 million that Boeing reported represents not only the company’s current presence in Washington, but also the sizable capital investments the company is making as it develops the 777X, 737 MAX and other capabilities in the state that will provide benefits to Washington for years to come.

(3)  Boeing invests in the Puget Sound community, in addition to the state’s aerospace capabilities.
Beyond the billions Boeing invested in Washington on employees and infrastructure in 2015, the company also provided more than $40 million in community contributions, plus more than $30 million towards employee continuing-education tuition, according to Boeing's 2015 Impact in Washington report.