Darrell Marmion, a 35-year Boeing employee, says that some of his early memories involve the 747. In fact, the liaison engineer saw the very first 747 while visiting his father at work as a 5-year-old in 1968.

“My dad’s name was Henry Richard Marmion, known as Hank here at Boeing,” Darrell said. “He was the manager in the mock-up shop for the 747 when it first started up in 1968. They were responsible for the flight deck portion of the airplane and doing mock-up construction.”

Hank was part of the team that designed, built and rolled out the first 747 in 1969. This team of engineers, mechanics, administrators and more were dubbed “The Incredibles” for rolling out the brand-new airplane in time for flight test in 16 months -- an unprecedented feat at the time.

Darrell’s love for aviation started with that first trip to see the 747 and the encouragement of his father.

“My dad had a passion to be an engineer, and he only went to two years of college. He always wanted me to become an engineer,” Darrell said. “He was the motivation to go get through my schooling because I was tempted to quit myself two years into it because it was so difficult. And my dad gave me the focus to keep going.” 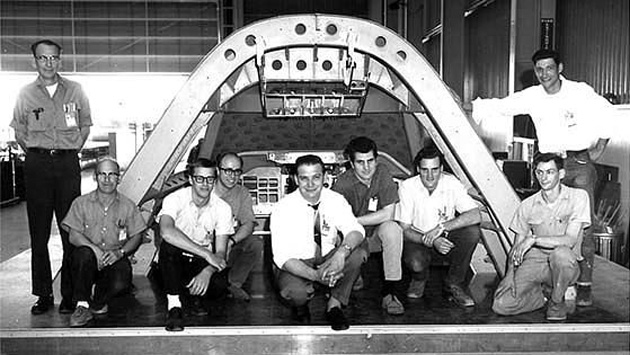 Hank Marmion (center) was the manager in the mock-up shop for the 747 when it first started up in 1968.

Darrell followed in his dad’s footsteps and worked on the 747 program as an engineer for some time, eventually winning the 2016 747 Engineer of the Year award for his work correcting a moisture-management issue on the 747-8 Intercontinental. With technical knowledge of a range of airplane models, he now supports the flight line in Everett, Washington – where 747s are assembled -- and other Boeing delivery centers.

However, the 747 has a special place in his heart. Darrell recently visited the Boeing 40-53 building where the former mock-up shop existed – more than 50 years after his father’s work on the airplane. The 747 is winding down its production run, and its final delivery is scheduled for later this year.

“To me, the 747 is iconic, both in its appearance and what it's done for travel and aviation,” Darrell said. “You don't have to look at winglets, you don't have to count engines. You look at the 747 and you know exactly what it is.”