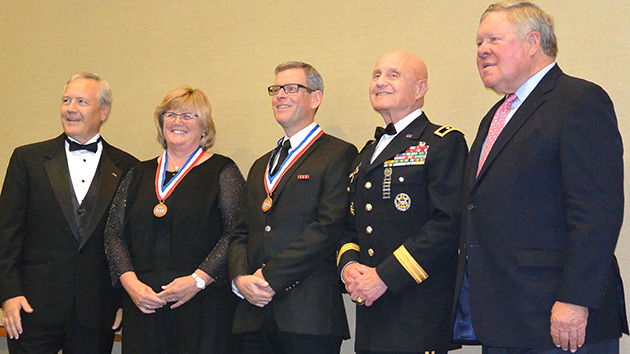 Each year thousands of military members and their families transit our region, often tired and in need of support.  To help make their journeys easier, the USO Northwest recently opened a new welcome center at Seattle-Tacoma International Airport that was made possible in part by a $335,000 grant from the Employees Community Fund of Boeing Puget Sound.

In special recognition of this and past efforts, the USO Northwest recently honored Boeing and its employees with its Order of Distinguished Service at their annual Gala and Auction in Seattle.

This award is the highest level of recognition by USO Northwest and is reserved for individuals and organizations having demonstrated exceptional service to military members and their families through sustained support of the USO Northwest.

“Military service puts a tremendous burden on our military and their families,” said Robert Malone, President of the ECF Board of Trustees.  “Boeing is committed to supporting our military and honored that the company and efforts of thousands of Puget Sound employees is being recognized.”

The United Services Organization is a nonprofit organization that lifts the spirits of America’s troops and their families millions of times each year at hundreds of places worldwide.

Boeing executives serve on USO boards, and many employees are volunteers. Since 1996, Boeing and its employees have given more than $1.3 million to the USO through charitable grants as well as contributions through the Employees Community Fund of Boeing.

“The mission of the USO is to lift the spirits of our military and their families,” said Tami Michaels, Gala Chair 2015, USO Board Member and U.S. Army Mom. “At the USO, what we do isn’t fancy. Whether it’s a safe place to sleep, something to eat, a telephone call home, or something as simple as a shower, USO Northwest continues to deliver on our promise to always be by their side.”

The ECF is a unique, employee-owned charitable giving program. Because Boeing pays all overhead costs, 100 percent of every dollar contributed to ECF is granted to nonprofit agencies providing health and human services. ECF grants enable agencies to purchase equipment, renovate their facilities and create new programs that directly help their clients and strengthen their communities.