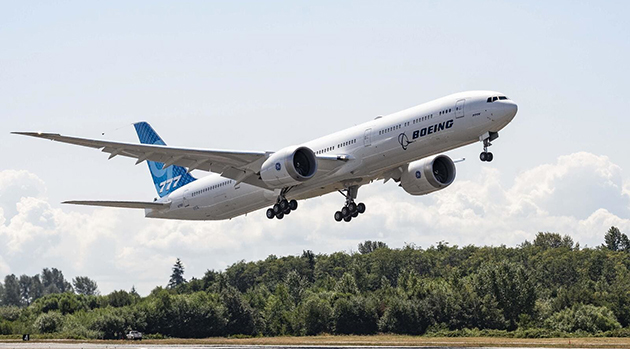 The third 777X flight test airplane takes off from Everett for its first flight test.

Boeing is executing a robust test plan for the 777X, a comprehensive series of tests and conditions on the ground and in the air to demonstrate the safety and reliability of the design. This airplane, known as WH003, is the third of four in the dedicated flight test fleet and will test propulsion performance.

The 777-8 and 777-9 are based on the 777, the most successful twin-aisle airplane ever, and feature advanced technologies and passenger experience features from the 787 Dreamliner. The 777-9 is designed to be the largest and most fuel-efficient twin-engine jet in the world. To build them, Boeing invested more than $1 billion to construct the Composite Wing Center in Everett to manufacture components for the largest and most advanced commercial airplane wing the company has ever built.