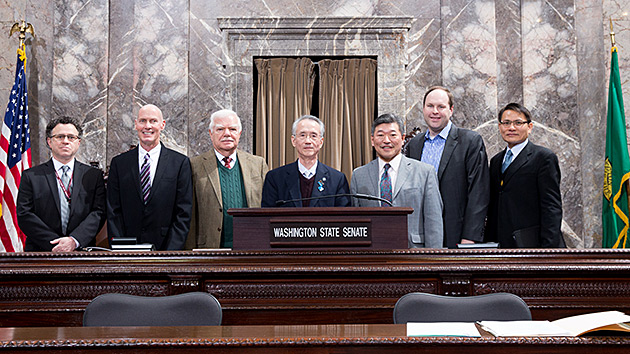 The Washington State Senate passed a special resolution to honor Boeing’s first engineer, Wong Tsoo, and to commemorate the 100th anniversary of his contributions to the aerospace industry and Boeing’s first century. It was read in the State Capitol building in Olympia on Jan. 25.

The idea was first proposed by Boeing retiree Key Donn, who had worked at Boeing as a senior systems architect. Senator Bob Hasegawa (D-Seattle) authored the resolution.

“Although he is unknown to most Washingtonians, Wong Tsoo helped build what has become one of our state’s largest companies,” Sen. Hasegawa said. “As Bill Boeing’s first engineer, he was a pioneer in aviation and a key figure in our state’s history. Mr. Wong’s story helps remind us of the breadth of the contributions early Chinese immigrants made to our local economy and to our country.”

Tsoo was a Chinese-American immigrant who came to the United States at age 17 to study aeronautics at the Massachusetts Institute of Technology. Upon graduating, Tsoo was hired by Bill Boeing as an engineer in 1916 at his newly incorporated Pacific Aero Products Company in Seattle, the predecessor to today’s Boeing Company.

Tsoo extensively redesigned the Model C seaplane to help it gain a governmental order during World War I for 56 of his redesigned aircraft.

The resolution details how Wong Tsoo’s “careful eye for detail on the Model C project” was integral in helping Boeing become the company it is today, as Boeing prepares to celebrate its centennial. Boeing is the state’s largest private employer and has contributed hundreds of millions of dollars to Puget Sound nonprofits.

Several representatives from Boeing attended the event, including Bill McSherry, vice president of Government Operations and Global Corporate Citizenship at Boeing Commercial Airplanes. In addition, Dan Hagedorn, senior curator of the Museum of Flight, and Chen-Chi Wu, deputy director of the Taipei Economic and Cultural Office in Seattle, attended the event.

Boeing will celebrate its centennial throughout 2016 with various events and activities. To learn more about the Boeing centennial, visit boeing.com/100.