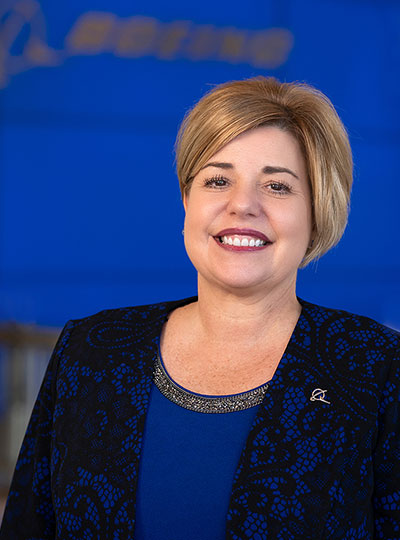 Heidi Grant is president of business development, where she leads a team representing Boeing’s defense, space and government services portfolios around the world.

Grant joined Boeing in November 2021 from the U.S. Department of Defense, having served as director, Defense Security Cooperation Agency, responsible for all DoD security cooperation programs involving defense articles, military training and other defense-related services. There, she oversaw more than 15,000 military sales cases with more than 150 countries valued at more than $600 billion. She also managed a certification program for 20,000 civillian and military personnel.

In 2002, Grant was appointed to the Senior Executive Service and assigned as the first civilian director, resources and analysis, for U.S. operations in the Middle East, Central and South Asia and North East Africa. Working with senior representatives from 65 countries, she led resource strategy and analysis for operations Iraqi Freedom and Enduring Freedom.

She later helped establish U.S. Africa Command as its first director of resources, leading personnel and financial programming that served as the foundation for successful interagency and international partnerships for global security.

From 2010 through 2018, Grant served as deputy under secretary of the Air Force, International Affairs, providing oversight and guidance for international policy and for programs supporting global national security objectives; technology and information disclosure; security assistance; education and training; and cooperative research and development. She also managed the Air Force Foreign Liaison Office and attaché affairs.

Grant holds a Master of Public Administration in financial management from Troy State University and a Bachelor of Science in business from Pfeiffer University. She is a member of the Council on Foreign Relations.