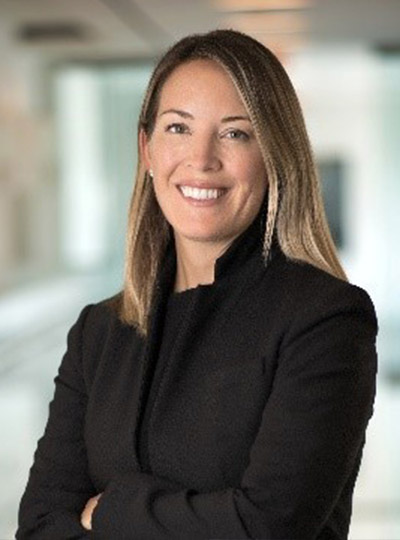 Greta Lundeberg is Vice President of International Operations and Policy at The Boeing Company, the world’s largest aerospace company and one of the largest U.S. exporters with customers in over 150 countries. Lundeberg oversees Boeing’s efforts with the U.S. Government on all international commercial, services and defense sales, leads engagement with the diplomatic community, and represents the company with international businesses, non-governmental organizations, and trade groups. Her organization is also responsible for coordinating Boeing's efforts on export policy, foreign military sales, visa policy, and technology transfer issues.

Since joining the company in 2014, Lundeberg has served as Vice President for Strategy and Advocacy and as Senior Director for International Government Operations, where she supported Boeing’s Chairman and CEO in his capacity as Chairman of the President’s Export Council.

Prior to joining Boeing, Lundeberg served under two National Security Advisors as Special Assistant to the President and Senior Director for Legislative Affairs on the White House National Security Council. Lundeberg led an interagency team that advocated for the President's national security agenda with Congress. Her work included advising Vice President Biden on defense and foreign policy issues and guiding the administration’s bipartisan congressional outreach on trade policy. Prior to her role at the White House, Lundeberg held various positions at the U.S. Department of State, the U.S. Trade Representative’s Office, and in the U.S. Senate. She served as a Senior Advisor to the late Ambassador Richard Holbrooke, the Special Representative to Afghanistan and Pakistan, as National Security Advisor to U.S. Senator Bill Nelson covering all international trade and security issues before the Senate Finance, Armed Services, and Foreign Relations Committees, and was a Foreign Policy Fellow to U.S. Senator Bob Casey.

Lundeberg began her career in the U.S. Government as a Presidential Management Fellow working as an India desk officer at the Department of State. She has also held policy roles at the Council on Foreign Relations, Asia Society and on several political campaigns.

Lundeberg earned her bachelor’s degree in political science from Vassar College, where she captained the varsity squash team, and holds a master’s degree in the history of international relations from the London School of Economics. She serves as an executive champion for Boeing’s Women Inspiring Leadership group and on the board of the U.S. Global Leadership Coalition. She is a life member at the Council on Foreign Relations and recipient of the Department of State’s Superior Honor Award and the National Security Council’s Outstanding Service Award. Greta lives in Washington, D.C. with her husband and two children.