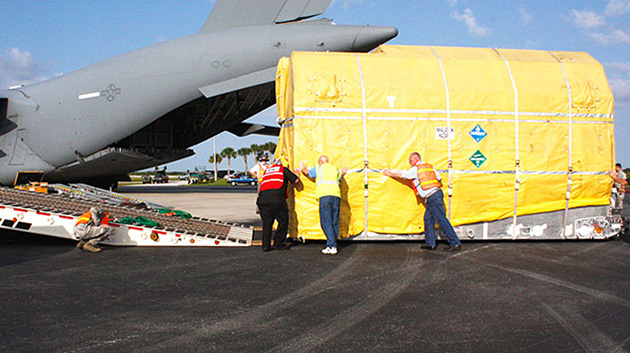 Unloading at Skid Strip
Its earth-bound journey comes to a close as the GPS IIF is unloaded at the historic Skid Strip landing facility on Cape Canaveral Air Force Station, Florida.

Boeing GPS satellites circle the Earth at a distance of 11,000 nautical miles. But one of the most important steps they take to reach their on-orbit destination can be measured in single numbers.

The journey begins at the Boeing Satellite Development Center in El Segundo, California, where Boeing is building 12 GPS IIF spacecraft for the U.S. Air Force, the steward of the GPS constellation.

Once assembled, each GPS IIF is loaded into a shipping container and trucked a short distance -- about three miles -- to Los Angeles International Airport, literally across the street from the factory.

The transfer is performed after 6 p.m., when the busy L.A. rush hour traffic has subsided. The convoy moves slowly, even more so when it comes time to slide the container into the C-17 Globemaster III, also built by Boeing for the Air Force.

“It is a tight fit, and must be performed meticulously,” explains Jim Jenkins, GPS IIF Launch Segment Integrated Product Team lead. “The same is true for the unloading process.”

The GPS IIF-4 milestone continues Boeing’s partnership with the Air Force on GPS constellation sustainment and modernization, ensuring the GPS constellation provides precise positioning, navigation and timing services to users around the globe.