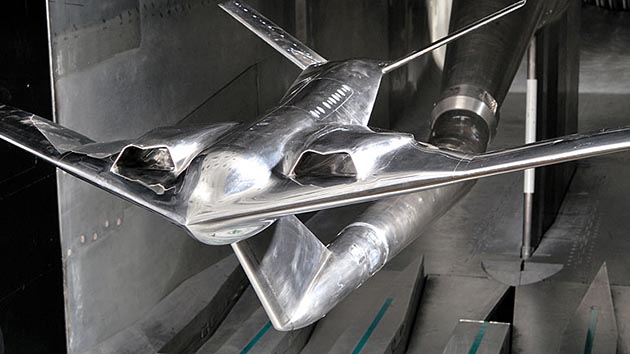 An Air Force mobility aircraft is on a mission to deliver soldiers and their supplies to a remote region of the world, but its target airstrip is rudimentary and shorter than ideal.

It’s a challenge becoming ever-more present in today’s battlefields, and the reason why Boeing took part in the Air Force Research Laboratory’s Speed Agile Concept Demonstrator Program along with other aerospace leaders. The goal was to design future concept “speed agility” aircraft that could take off and land on shorter runways and fly at a wide range of speeds, while carrying the necessary payloads.

And though it may be years before any of the team’s developments make it onto an aircraft, their innovative achievements are not going unnoticed. Earlier this month, the program was awarded Aviation Week magazine’s Laureate Awards in Aeronautics and Propulsion at an event in Washington, D.C.

“It is a great honor for our team to have been selected to receive such a coveted award intended to recognize extraordinary and innovative achievements in aerospace, aviation, and defense,” said Mark Anderson, BR&T Flight Sciences Technology director.  “This recognition speaks volumes as to the technical excellence of our Boeing engineering team.”

Graham Warwick, Aviation Week’s managing editor for technology, said the program impressed by “using a modest, but sustained investment in ground testing, at increasing scale, to mature technology to a higher readiness level.” He also noted that “too often such valuable and successful engineering efforts go unrecognized because they do not culminate in a highly visible flying testbed.”

According to Kamal Shweyk, manager of the Flight Dynamics and Control team responsible for the Vehicle Management System, by developing components and technologies to a point where they are proven feasible and effective to meet multiple and traditionally conflicting mission requirements, Boeing is positioning itself well for when the Air Force goes to market for its next-generation transport aircraft.

One major milestone was developing a safe and robust flight control system for an aircraft that can fly at low enough speeds to land on a short runway, while also cruising at speeds faster than 0.8 Mach, which is much faster than the C-130 and other current mobility aircraft.

“The benefit from these years of research and testing is that Boeing was able to develop and mature technologies that are key to realizing a fully integrated speed agile concept,” Shweyk said. “While this technology isn’t being implemented right away, successful testing and validation of these systems will better position us when our customer is ready to develop its next generation of transport aircraft.”

Another major challenge for the team was finding a way to slow down the aircraft to a point where it could land on less than 2,000 feet of runway -- about half of the normal distance.

Their answer was a hybrid-lift system that rotates the thrust during landings, slowing the aircraft down enough to use half as much runway space.

Vassberg said the airframe’s design met the Air Force’s strict requirements, noting that the inboard section of the wing incorporated vectored thrust to provide powered lift, while the active flow control (AFC) was utilized over the outboard wing to increase the aircraft’s maximum lifting capabilities.

“We had a lot of challenges along the way, but it was very gratifying to see all the pieces come together,” he said. “This was a huge success for Boeing.”

According to Vassberg, active flow control technology is drawing the attention of Boeing Commercial Airplanes because it allows for shorter and steeper descents, making for a smaller acoustic footprint.