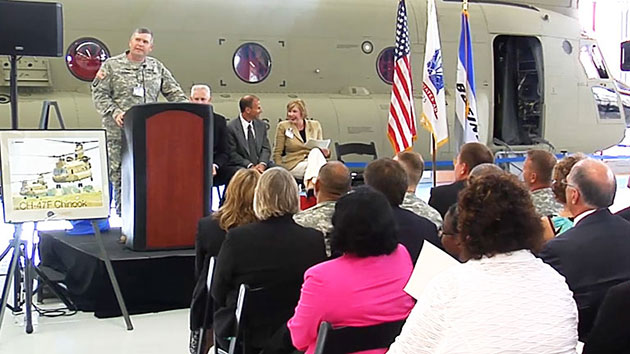 There are more than 200 V-22 Ospreys (including MV-22 and CV-22 variants) in the operational fleet. Over the next five years, that number will increase by 99 (92 MV-22s and seven CV-22s) following a contract signing Jun 12 valued at $6.5 billion. The U.S. Marines have used MV-22 and U.S. Air Forces Special Forces have used the CV-22 extensively in combat operations throughout Iraq and Afghanistan. It can fly twice as fast as a conventional helicopter and that capability has proven itself on the battlefield.

Check out the video to see how the CV-22's speed saved the lives of a Special Forces unit during a fierce ambush in Afghanistan.

In 2019, the U.S. Army and Boeing will celebrate 55 years of Chinook production, thanks to a five-year contract signed June 10 in Philadelphia worth more than $4 billion. Since 1962, Boeing has delivered more than 1,000 Chinooks to the Army. They have seen action in every major conflict since Vietnam and have supported countless humanitarian missions throughout the world.