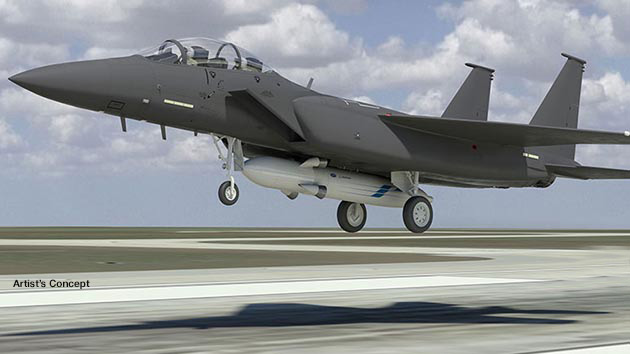 A new way to launch microsatellites and space payloads is on the horizon. Boeing is working with the Defense Advanced Research Projects Agency (DARPA) to produce this innovative 24-foot (7.3-meter) launch vehicle and conduct flight testing.

What Boeing vehicle would hitch a ride on an F-15E, drop from the aircraft, fire its engines and deploy microsatellites into space?

Under an 11-month, $30.6-million contract with options to build up to 12 of the 24-foot vehicles, Boeing and DARPA intend to test the ability to cut the cost of routinely launching microsatellites into orbit by 66 percent. According to DARPA, ALASA aims to develop and employ radical advances in launch systems, leading to more affordable and responsive space access compared to current military and U.S. commercial launch operations.

Rockets today are designed using a number of stages, each with its own engine and fuel tanks. The first stage is at the bottom and is usually the largest, the second and subsequent upper stages are above it, and normally decrease in size.

Boeing’s design takes the concept one step further and shifts traditional thinking when it comes to today’s launch vehicles.

“As these stages are jettisoned (or dropped), the fuel tank and engines are just thrown away. We developed a cost-effective design by moving the engines forward on the launch vehicle. With our design, the first and second stages are powered by the same engines, reducing weight and complexity,” explained Steve Johnston, director, Advanced Space Exploration.

The 24-foot (7.3-meter) ALASA vehicle is designed to attach under an F-15E aircraft. Once the airplane reaches approximately 40,000 feet, it would release the ALASA vehicle. The vehicle would then fire its four main engines and launch into low-Earth orbit to deploy one or more microsatellites weighing up to a total of 100 pounds (45 kilograms).