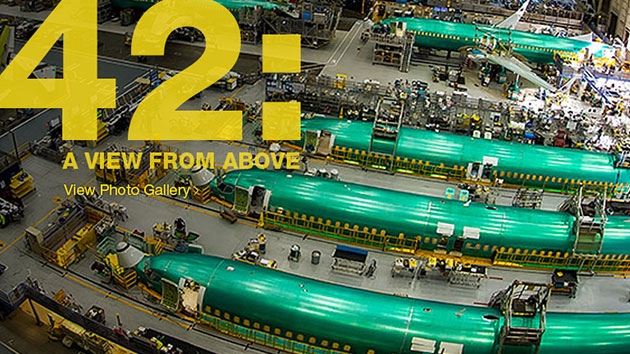 To meet demand, Boeing is producing its best-selling 737 jetliner at rates that once might have seemed unthinkable.

Last month, employees at the 737 factory in Renton, Wash., rolled out the first airplane produced at a rate of 42 per month. While the focus now is on sustaining that rate, Boeing Commercial Airplanes has scheduled another increase to 47 a month in 2017 and is studying rates beyond that, should the market demand it.

“Efficiency improvements in the factory, many of them developed by our employees, are a big part of why we’re able to successfully increase the number of airplanes we build,” said Beverly Wyse, vice president and general manager of the 737 program.

Boeing photographer Bob Ferguson recently visited the Renton site and took these photos from high above the assembly lines -- a different perspective from the hubbub of activity on the factory floor.

Read more stories in the April 2014 issue of Frontiers.