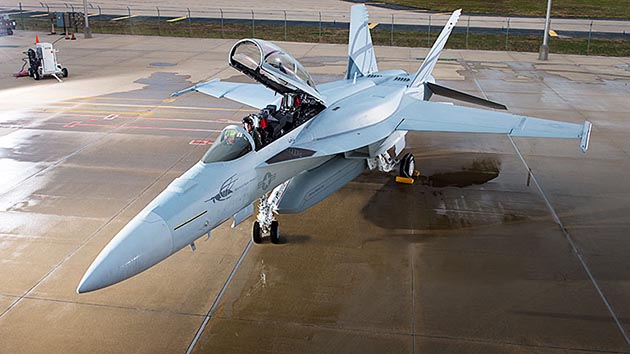 Steve Schmidt, F/A-18 Super Hornet test pilot, seated in the cockpit, flies for Boeing Test & Evaluation. He participated in the recent flight-test program for the Advanced Super Hornet, which is shown here at Boeing’s St. Louis site where the Super Hornet is built.

Boeing test pilots “Sting” and “Bull” had just put the company’s Advanced Super Hornet through a series of maneuvers in the skies near St. Louis and, back on the ground, were engaged in pilot talk, discussing what the updates will mean for warfighters on the first day of battle, before enemy radar and other threats are degraded or destroyed.

“What we’ve done is really advance the stealth capability of the Super Hornet and give it that first-day-of-war capability. It can go farther into enemy territory without being detected,” said Steve Schmidt, call sign “Bull.”

And bring much more to the fight, added Mike Wallace, call sign “Sting.”

Since that first flight back in early August, the Advanced Super Hornet demonstration aircraft has completed a flight-test program totaling 27 flights and more than 40 hours in the air, first in St. Louis and later for additional testing at the U.S. Navy’s Patuxent River, Md., flight-test facility.

Built in St. Louis, the F/A-18E/F Super Hornet is the mainstay carrier-based fighter of the U.S. Navy. More than 600 are in operation with the Navy and U.S. allies around the world. The Advanced version is not a new aircraft type, but a suite of enhancements that can be ordered a la carte by customers for new Super Hornets or retrofitted onto existing aircraft. They also can be added to the EA-18 Growler, the electronic warfare version of the Super Hornet.

Last month, Wallace, Schmidt and two other test pilots with Boeing Test & Evaluation, all of whom who flew many of those test flights, spoke with Frontiers about the Advanced Super Hornet and what its new capabilities mean for potential domestic and foreign customers—and for military fighter pilots. All four were military fighter pilots before they joined Boeing.

“We always want to be not one step ahead of the enemy but five steps ahead,” explained John Tougas, who, like Wallace and Schmidt, is an F/A-18 Super Hornet test pilot. Tougas was designated lead project pilot for the Advanced Super Hornet flight tests, responsible for test planning, test hazard analysis, and test execution and data collection, including flying some of the missions.