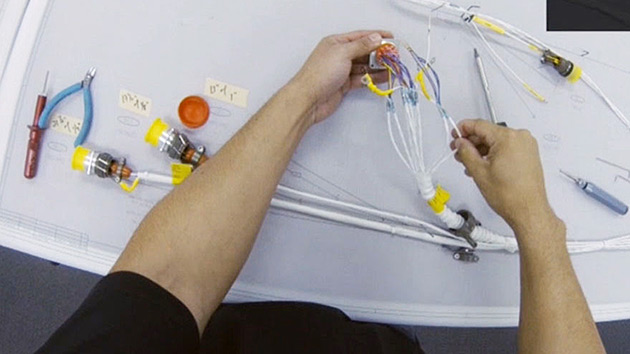 Smart eyeglass devices such as Google Glass could be a valuable tool for Boeing's manufacturing environment - especially for tasks such as assembling wire harnesses.

Ask Boeing electrical technician Ricky Ramirez what he needs more than anything to do his job and he’ll show you his hands. Assembling wire harnesses for Boeing Commercial Airplanes, his hands stay busy, constantly moving between his intricate work and flipping through the stacks of paper instructions.

“We don’t want to stop and look down at our paperwork every time we needed some information,” Ramirez said.

Recently, Ramirez had a chance to swap out all that paper and test out Google Glass, a smart device worn like glasses that operates as a heads-up display.

“The good thing about Google Glass is that we just glance up with our eyes and the information would be right there that we needed,” he said.

Ramirez and his group were the first at Boeing to be involved in a beta test using Google Glass, which Boeing research engineers say can reduce the time needed to complete work, while improving training and ergonomics.

Engineers Jason Destories and Jim Crocco worked with their manager Fred Edman, who saw smart eyeglass devices such as Glass as a potentially valuable tool for the company’s vast and diverse manufacturing environment.

With that potential in mind, the two engineers approached the wire harness team and soon after began a pilot program for Glass, including working with colleagues to develop a voice-activated application to replace paper products.

“All these paper products instructions were in a database, and it looked fairly easy to pull all of that data and create an application for Google Glass,” said DeStories.

DeStories and his team are part of Boeing Research & Technology, the company’s advanced, central R&D organization.

During the test, Ramirez and his co-workers seamlessly saw instructions in a view-finder, gliding through multiple prompts just by using gestures, such as voice control, the touchpad on the side of Glass, and the head tracking interface. And the benefits go beyond ease.

Researchers say the technology could be used anywhere in the company’s manufacturing and assembly areas where paper instructions are required.

There’s also potential beyond Earth’s orbit. Boeing teammates in Houston, in working with research colleagues in Mesa, Ariz., and Seattle, are investigating how Glass can be used on the International Space Station for increased payload utilization and crew efficiency.

“We’re using it in this area for now, but Glass could easily become a ‘game changer’ for how Boeing employees complete manual assembly jobs,” said Edman “The sky is the limit with this type of technology, and we’re excited to see the innovative ways it is used at the company.”

Google Glass is an example of another Advanced Manufacturing tool that enhances production capabilities through technology and the company’s journey to continuously improve Boeing’s processes in safety, quality and productivity.

With beta tests proving successful, Boeing expects to have Glass implemented into the wire harness production environment in the near future.