The last time anyone had a close view of the USS Independence, a light WWII aircraft carrier, was January 26th, 1951—until now. Boeing’s unmanned underwater vehicle, Echo Ranger, the National Oceanic Atmospheric Administration’s (NOAA) research vessel and Coda Octopus’ Echoscope 3D sonar imaging technology merged for a mission to capture the most detailed, colorful look at the sunken vessel in more than six decades.

The U.S. Navy intentionally scuttled the Independence about 30 miles off the coast of Half Moon Bay, Calif. Its dark, watery resting place lies 3,000 feet below the Pacific Ocean’s surface—too deep for divers and a challenging task for remotely operated vehicles. With its ability to dive to depths of 10,000 feet autonomously, Echo Ranger provided a platform to get an up close look at the Independence. The bright yellow underwater submersible launched from NOAA’s research vessel, the Fulmar, in a multi-day mission. Incorporating Coda Octopus’ 3D sonar imagery software, Echo Ranger brought back colorful high definition images that reveal the features of the aircraft carrier and a snapshot in time. “Technology meets history in an exciting way,” said James Delgado, Director of Maritime Heritage, NOAA office of National Marine Sanctuaries. “It’s not just a ship that is deep under water, it’s the human dimension and the stories that go with it.”

Check out the Boeing video to view the images, watch Echo Ranger’s diving skills and discover maritime archeology. There are also some great shots of the Echo Ranger being tested in this Flickr album. 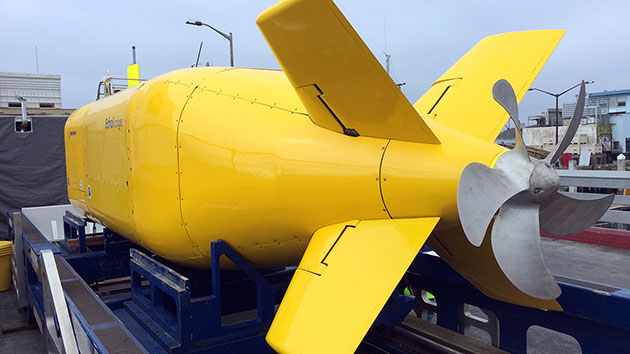