As a new 737-900ER for United Airlines was prepped for its delivery flight from Boeing Field last week, the two pilots in the flight deck knew this wouldn’t be a typical trip.

Captain Kim Noakes and First Officer Jann Lumbrazo were just two of the more than 100 women who made up the all female flight—designed to encourage the next generation of women leaders in aviation.

“I do love flying. It’s the best thing on the planet,” said Lumbrazo. “That’s why you have to find people who can help you along the way. Find a mentor. Find somebody that can give you advice on how to pursue your goals.”

The all women delivery showcased the efforts of United’s internal organization called “uIMPACT,” a women’s business resource group marking its first anniversary. The group’s mission is to promote movement, advancement and connection for women within United Airlines.

Female executives, employees and pilots from United and Boeing attended the delivery to celebrate the accomplishments of women in aviation.

“Thank you for bringing the sisterhood to Seattle,” Nicole Piasecki, Commercial Airplanes vice president and general manager of Propulsion Systems, told the gathering. “My hope is that events like this can really inspire a younger generation to come into aviation.” 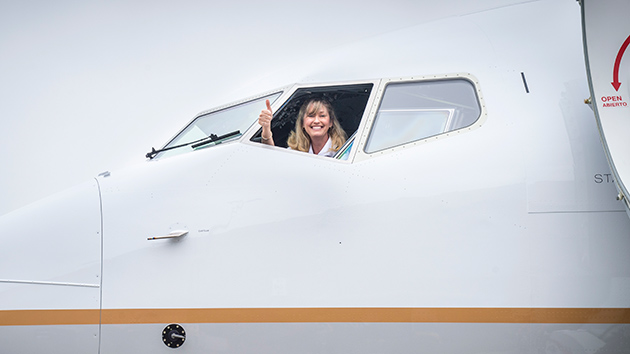 Captain Kim Noakes prepares to take off from Seattle in a United Airlines Boeing 737-900ER (Extended Range) airplane. United took delivery of the airplane on May 20.