“A series of tests are done to push the engine around the envelope [of flight] so that when the airplane gets ready to fly, the engine has already been to all the places the airplane is going to go,” said Edwin Sharp, CFM Flight Test engineer.

The CFM team demonstrated their efficient flight test operations that include a modified 747-100 and 747-400 flying test beds. Both are being used to test members of the LEAP family.

Speaking to the CFM flight-test team in Victorville, Michael Teal thanked the team for its focus and efficiency. “It really looks like you are on step,” said Michael Teal, vice president and chief project engineer, 737 MAX. “After the pre-flight brief it was just 40 minutes before you were on the airplane ready to go. You are doing really well.”

In addition to testing the engine, the flying test bed is helping test new Boeing hardware for the 737 MAX. “This is our first opportunity to see the entire propulsion package come together including the engine, nacelle and strut and to be able to fly it before incorporation on the MAX,” said Justin Shiosaki, 737 MAX Propulsion leader.

Over the next several weeks engineers will test the operability, emissions and performance of the new engine for the 737 MAX. Initial results indicate that the engine is on track to contribute the majority of the 737 MAX’s 14 percent fuel efficiency improvement versus today’s most efficient Next-Generation 737s and 20 percent improvement versus the first Next-Generation 737s to enter service.

“I think the most exciting thing is the LEAP engine is pretty much going to define the single-aisle engine market for the next 20 to 40 years so to be part of that is very exciting,” said Steve Crane, chief test pilot, CFM. 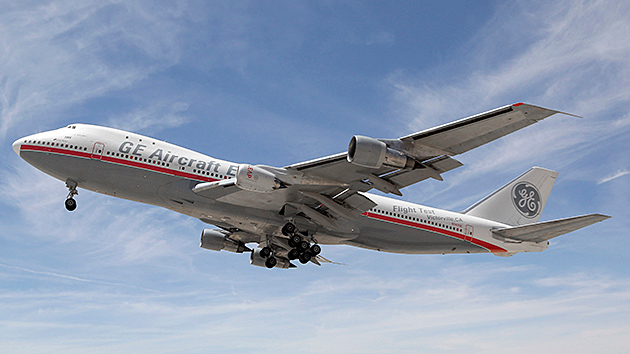 The new LEAP-1B engine, seen here, being tested on this 747 flying testbed in Victorville, CA. This engine is right on track to deliver the majority of a 20% improvement in fuel efficiency for the 737 MAX as compared to the original 737 Next Generation.