Boeing, the United States Air Force, and the worldwide fleet of C-17 Globemaster IIIs celebrated the fleet reaching three million flight hours with a ceremonial flight from Robins Air Force base in Georgia to Joint Base Charleston in South Carolina.

The flight was marked with celebrations at both bases where Boeing, the Air Force, and guests including those lucky enough to be on the flight, congratulated each other on the incredible accomplishment.

“It was fantastic to be up there and just to experience that, and experience the power from that end of the aircraft. It was really wonderful,” said C-17 System Program Director Col. Amanda Myers.

According to the Air Force, three million flight hours is the equivalent of flying around the Earth 55,555 times, 2,948 trips to the moon, or a single C-17 flying nonstop for 342 years.

Boeing has delivered 223 C-17 Globemaster IIIs to the USAF and 44 to its worldwide partners. 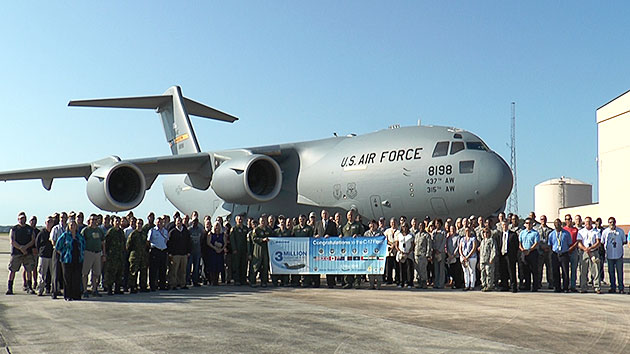