In 2013, CV-22 Osprey pilot Air Force Major Brett Cassidy was flying lead on a three-bird rescue mission to the U.N. compound in Bor, South Sudan. Upon final approach for landing, the three CV-22s took heavy fire including rocket-propelled grenade fire from ground forces. The Ospreys were severely damaged and the Special Operators on board were seriously wounded.

Major Cassidy’s plane, tail number 42, was fully repaired and sent back into service. After another full tour of duty, #42 returned to Hurlburt Field, Fla. for general maintenance. Major Cassidy was on hand to see his CV-22 again, and retell the story of their mission. 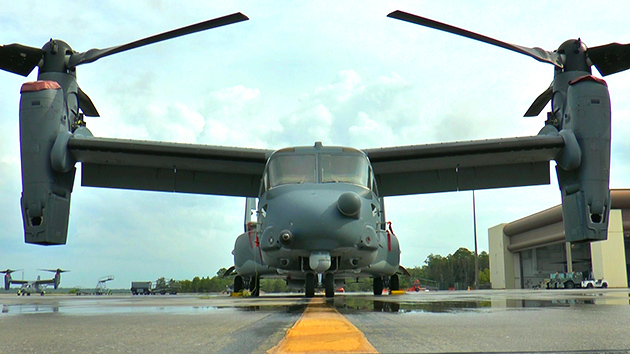 CV-22 Osprey, tail number 42, at Hurlburt Field after returning from a tour of duty.