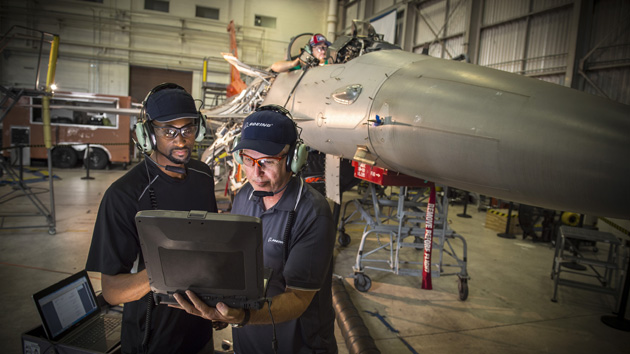 Jumar Harrison, far left, and Harold Rentz, with Tim Schubert in the cockpit, perform avionics testing on the QF-16 at the Boeing Cecil Field site in Jacksonville, Fla.

In the 20 years he served in the U.S. Air Force, Jumar Harrison never imagined that one day he’d be transforming a jet designed to help fighter pilots protect freedom into the very target they train to shoot down.

An avionics technician on the QF-16 program for nearly a year, Harrison is part of a team at Boeing’s Cecil Field site in Jacksonville, Fla., that’s converting retired Lockheed Martin F-16s into unmanned, remote-controlled targets for the Air Force to use in pilot training. He performs systems testing and evaluation to ensure that each modified aircraft operates as it should.

“I’m going full circle,” said Harrison of working on the F-16 for the Air Force when it was relatively new to now helping convert it from boneyard storage into an unmanned flying target that pilots use to learn and sharpen air-to-air dogfighting skills. “It’s kind of a surreal experience.”

The QF-16, which is controlled by a pilot on the ground, replaces the Vietnam-era F-4 Phantom that was used for years in a similar Air Force training role. Those involved with the QF-16 program said it provides better training for pilots.

They are in supply—and better represent the type of threat today’s pilots might face, said Harold Rentz, who, like Harrison, has been working in QF-16 avionics for about a year.

The targets have the F-16’s full capabilities as far as speed and roll. When maneuvering, the QF-16 can produce forces as high as 9 G’s, or nine times gravity. Air Force squadrons training with the target can practice radar intercepts, tactics and targeting against a strongly maneuvering opponent, according to Boeing. And some pilots may even get a chance to shoot the target down with a live missile shot.

Boeing delivered the first production QF-16 to the 82nd Aerial Targets Squadron at Tyndall Air Force Base, in Florida, last March, followed by six more aircraft. By March of this year, Boeing had delivered 11 aircraft and received a contract for 30 additional targets. 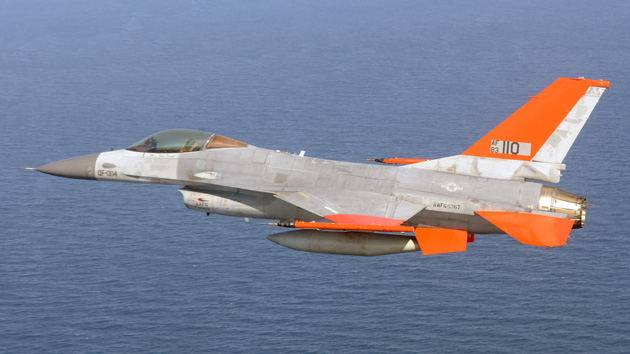 A QF-16 from the 82nd Aerial Targets Squadron performs its first unmanned flight at Tyndall Air Force Base, in Florida, in September 2015.