The Boeing facility in San Antonio, Texas has upgraded and delivered nearly 1,000 planes to customers around the world. Those aircraft include the C-17 Globemaster III fleet.

Most of the work happens inside the largest free standing hangar in the world (according to Guinness World Records). The planes undergo a complete overhaul including structural, avionics and self-defense systems work that will keep the C-17 fleet flying for decades to come.

Boeing completed production of the final C-17 Globemaster III, plane number 279, in November, 2015 and, currently, there are 271 C-17s flying throughout the world. In 2015, the fleet surpassed three million flight hours. The largest customer is the United States Air Force with 223 planes.  The United Kingdom, Australia, Canada, Kuwait, Qatar, the United Arab Emirates, India and NATO all operate the C-17 Globemaster III. C-17 sustainment work is also done at Robins Air Force Base in Warner Robins, Georgia.

Watch the video to see the work and the future of the C-17 Globemaster III. And check out the C-17 page. 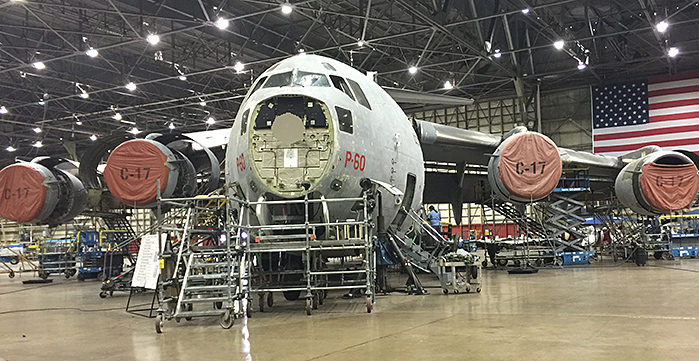 Full service: All four engines, fuselage, nose, wings, and tail are stripped and ready for their next round of maintenance.