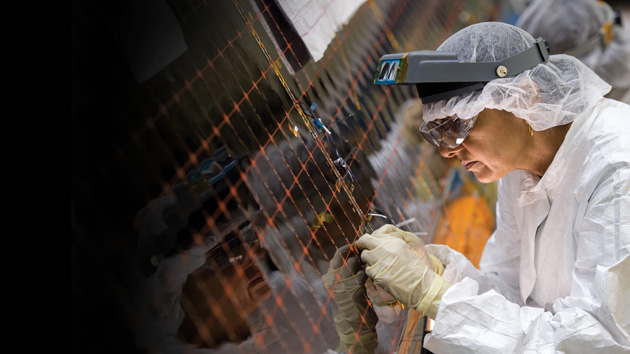 Lakhvir Sekhon wires the front of a solar panel used to generate electricity to power a satellite.

Inside a cluster of tan buildings at the base of California’s San Gabriel Mountains—and thousands of miles below most of the products it manufactures—Spectrolab’s scientists, engineers, technicians and a one-armed robot form the world’s largest producer of space solar cells and solar panels.

A wholly owned Boeing subsidiary, Spectrolab has provided electric power to more than 600 satellites and delivered more than 4 million solar cells for communications, science and defense needs. It is responsible for the solar panels that sustain the International Space Station and the planet-finder Kepler Solar Array, and for the electric power to the Mars rover Opportunity, which is still exploring that planet 12 years after landing. Relying on Spectrolab solar cells, NASA’s Juno space probe earlier this year reached a record 492 million miles (792 million kilometers) from the sun—the longest distance ever from the sun by a spacecraft using solar power. Its final destination is Jupiter.

Spectrolab is so ingrained in space it even captures the imagination of the people who work in its factory in Sylmar, Calif., which is northeast of Los Angeles. That includes Rina Bardfield, panel design and test engineering section leader. Her love for the TV series Star Trek led her into her profession. Spectrolab keeps her there.

“It’s all science-fiction stuff, but it’s what we do; it’s a leaping point for sure,” Bardfield said. “I get a little choked up when I stop to think about it—we do pretty cool stuff.”

Spectrolab, founded in 1956 by recently deceased philanthropist and entrepreneur Alfred Mann, has three main product lines: solar cells, solar simulators and lighting. One business has led to another. The need to test the cells brought the simulators, which, in turn, created the illumination products. Today, Spectrolab provides 80 percent of the helicopter-mounted searchlights used by U.S. law enforcement, according to the company. 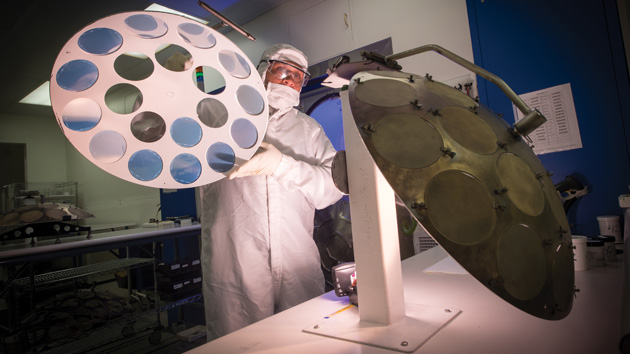 A solar cell is a device used to convert sunlight into electricity. The cells are the building blocks that form photovoltaic modules, or solar panels. The International Space Station has 275,000 solar cells that generate up to 120 kilowatts, or about what it takes to power more than 100 households in the United States, the largest amount of power of any space vehicle in orbit.

“There is the opportunity for evolution, and at the same time revolution, to change people’s lives for the better,” said Tony Mueller, Spectrolab president, of the solar cell. “You have to be on your ‘A game’ every single day because you know it has to work.”

At Spectrolab, solar cells are created in a chemical reactor, which looks like a 3-foot-diameter (1-meter) stainless steel tank. The process takes 90 minutes. At high temperatures, gases, metals and other materials form crystal layers on germanium wafers. In a fabrication laboratory, solar cells are cut from the wafers, the layers forming triple-junction structures, with each layer capable of receiving a different color of light. “We grow different kinds of crystal to absorb different parts of the solar spectrum,” explained Jeff Krogen, senior director for photovoltaic metal organic vapor phase epitaxy, which describes the growth process.

Solar panels are sized to fit the needs of the space vehicle, which mostly involve communications satellites. Spectrolab shipped out over 200 solar panels in 2015, many of them going to international customers. The panels come with a 25-year reliability life. Spectrolab’s most recent solar cell technology has a greater than 30 percent efficiency rate for turning each watt of sunlight into electricity—double what it was two decades earlier, according to the company.

In the factory high bay area, technicians work on rectangular orange and black panels, soldering or snipping wires, applying liquid adhesive and tape, and cleaning debris particles off the surface. Panels are mounted on stands and are flipped over with the turn of a wheel.

The work is so precise that Beth Chiodetti, a Spectrolab technician for 37 years, wears headgear replete with magnifying glasses and yet uses a separate hand-held magnifying glass, all to check solar panel connections. The goal for her and her colleagues is to build the solar panel right the first time in the factory, Chiodetti said. There is no room for error later on.

“The mantra of launching something into space is this: Once it’s gone, you don’t get it back,” pointed out Chris Fetzer, chief engineer, epitaxy products.

The cells must be perfectly mated on the panels to be properly exposed to the sun. The panels have robust glass covers and are tested for electrostatic discharge, one of the largest causes of failure during testing.

Richard Smith, a 15-year Spectrolab technician, keeps track of everything he does on a color-coded paper taped to the panel. He makes sure all wires are soldered to tabs. He calls out a warning to others as he flips a panel over.

“I’m very proud of the work that we do,” he said. “My name is on some of the stuff that’s on the Mars Orbiter and the Kepler satellite.” 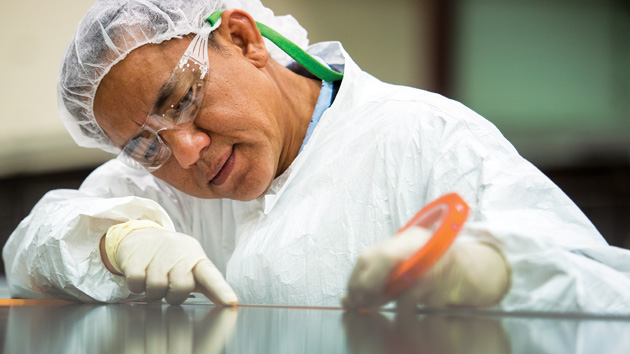 Depending on size, panels are completed in four and a half to six months. They need to be tested on- and off-site. They leave the factory packaged in a variety of containers, everything from metal crates to wooden boxes, wrapped in foam and shock mattresses.

Spectrolab continues to look for ways to make panel production less time-consuming and more economical. That might involve finding new methods or applications to shave days or even weeks off the process. The 300-person Spectrolab team is highly skilled and experienced, said Jim Hanley, senior director, solar panel operations.

“We’re around the periphery of space power,” Hanley said, standing in a room filled with 36 solar panels. “Nothing gets done here without it being done right.”

Separate solar cells are either shipped directly to the customer after testing or assembled into CICs, which stands for Covered Interconnected Cells. Spectrolab uses a robot to perform the latter chore.
Twenty hours a day inside a large glass case, the half-body robot methodically picks up a cell, welds and mounts it to space-grade glass, attaches a diode (which is an electrical component) to the back, and places the CIC in an area for human inspection.

“We call it Susie,” said Jose Gonzalez, an assembler, of the one-armed space auto welder.

Spectrolab’s lighting business is housed in a building adjacent to its solar technologies. The company has been selling helicopter searchlights since the Los Angeles Police Department first used one in 1968, and has spun off solar technologies ever since, said Luis Castro, business development manager, illumination and sensor products.

While Spectrolab eventually wants to illuminate everything on a Boeing aircraft, from cabin lighting to landing lights, it also is developing Spectroscan, a form of Lidar, which stands for light detection and ranging, Castro said. Spectroscan is a radar-like camera with 3-D imaging. In the future, it is hoped the camera will enable autonomous tasks in the simplest form, helping map cargo loading on an aircraft, scanning runways for foreign object debris—even guiding driver-less cars, according to Castro. “It will change the way many things can be done,” he said.

In July, Spectrolab will reflect on its 60 years of operation while Boeing celebrates its centennial. For the two companies, it will be a month of milestones. Each will reflect on past accomplishments and look hard at the future, noted Mueller, Spectrolab president.

For Spectrolab, a Boeing subsidiary since 2000, it will continue to focus on core satellite and deep-space exploration markets while also diversifying its business with illumination and sensor products, Mueller said. “We’re in a business where there’s going to be a continual evolution of technology, he said. “We must always be mindful of what our customers need and when they need it. We can’t rest on our legacy.”