The United States Marine Corps is facing a dilemma. There are not enough combat ready fighter jets for their pilots around the world. Boeing’s answer to this problem is the C+ Program. The program will take 30 retired F/A-18C Hornets and upgrade them to the most state-of-the-art platform, creating the F/A-18C+.

“As a former squadron commander, I knew how important it was to have aircraft on the ramp. With this C+ program, we are introducing good viable aircraft back into the fleet for them to use for years to come,” says Bill Maxwell, a Boeing F/A-18 Production Senior Manager and retired Marine Corps pilot.

The jets are trucked from Davis-Monthan Air Force Base to Cecil Field near Jacksonville, Fla. Davis-Monthan is the largest military aircraft storage center in the world.

Watch the video to see the first Hornet arrive at Cecil Field on a flatbed trailer. Check this out to see how Boeing modernizes other aircraft. 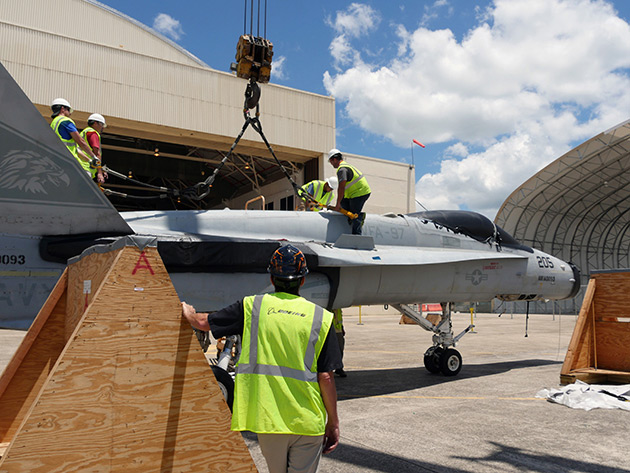 Cecil Field workers unhook the crane after safely hoisting the 15,000 pound F/A-18 Hornet to the ground.