Boeing test teams reached a significant milestone for the CST-100 Starliner program by testing the parachute system Starliner will use on its return to Earth.

Using a helium-filled balloon, it took about 30 minutes for the test vehicle to reach 38,300 ft. The ride down took four minutes and reached speeds of 300 mph. A series of mortars deployed parachutes at different altitudes, ultimately slowing the vehicle down to gently land.

“Visually, it performed better than expected,” said Tony Taylor, lead engineer for the Starliner parachute system. “Now, we have to go analyze all the data and then go drop the capsule a few more times.”

This was the first test to prove Starliner's ability to return from space. More testing is planned for the next several months. For more information on Starliner click here.

Watch the video and see inside the CST-100 Starliner test vehicle during its return to the ground. 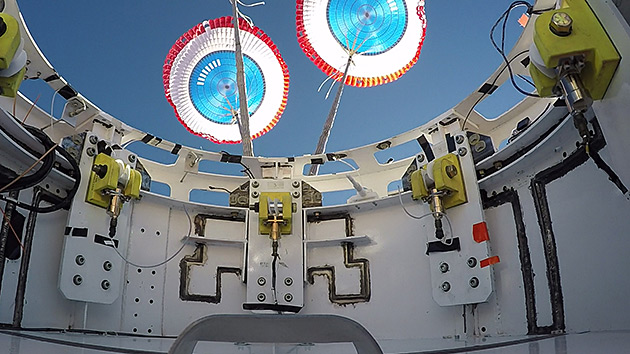 From inside the CST-100 test vehicle looking up at the main parachutes.