Boeing test engineers are checking the vehicle’s communications, autonomy, propulsion, systems integration and the vehicle’s battery operation with a mix of surface swims and shallow dives.

Initial testing was done in Boeing’s Huntington Beach facility where Echo Voyager was tested in a large pool before being trucked to the Pacific.

The ocean testing is critical to Echo Voyager’s success because under water autonomy has a higher level of difficulty. Once Echo Voyager submerges for a long distance swim it is completely on its own.

“Unlike an aerial vehicle, or a satellite where you can communicate with it when it’s in trouble, with subsea vehicles you can’t do that because of the communication,” said David Flowers, Boeing Program Manager of XLUUV Development. “So autonomy is that much more important. The vehicle has got to understand what to do if it gets in trouble, make rule-based decisions and act in a way that allows it to stay safe and complete its mission.” 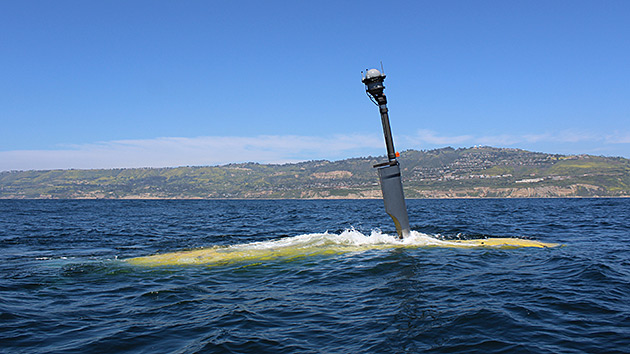 The 51-foot-long Echo Voyager swims just off the Southern California coast. The yellow paint makes it easy for test engineers to spot in the dark blue water.