After completing its final carrier deployment for the U.S. Navy, VFA-34, returned home to its base in Oceana, Virginia, but not before an overnight stop in St. Louis, Missouri, and a friendly visit with F/A-18 program employees at the Boeing St. Louis site.

The squadron, known as The Blue Blasters, landed in St. Louis and parked their F/A-18C Hornets on the flight ramp at Boeing, where over 200 employees provided a hero’s welcome.

“It was a great opportunity to stop by here,” Commander Perry Solomon said, “And say thanks to the men and women who build these airplanes. This has been the backbone of the wars we’ve been fighting for years. It’s been the real workhorse that has ensured our victories around the world.”

The 10 pilots shared a meet and greet with Boeing employees shortly after landing.  Some employees on site worked with the F/A-18 program when the jets from the Blue Blasters’ squadron rolled off the St. Louis assembly line.

Watch the video to hear their reactions to witnessing the Blue Blasters return to the city in which they were all born. 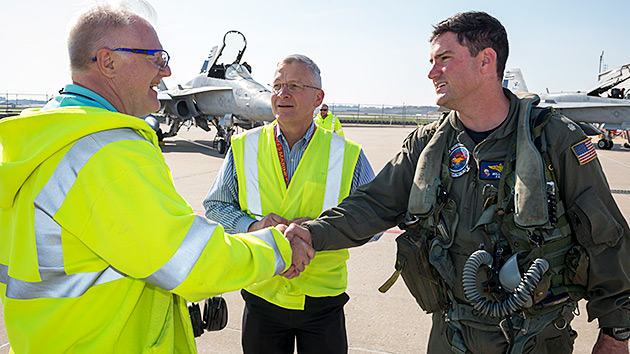 A pilot from the U.S. Navy VFA-34 squadron, the Blue Blasters, meets Boeing employees from the F/A-18 program in St. Louis, Missouri.