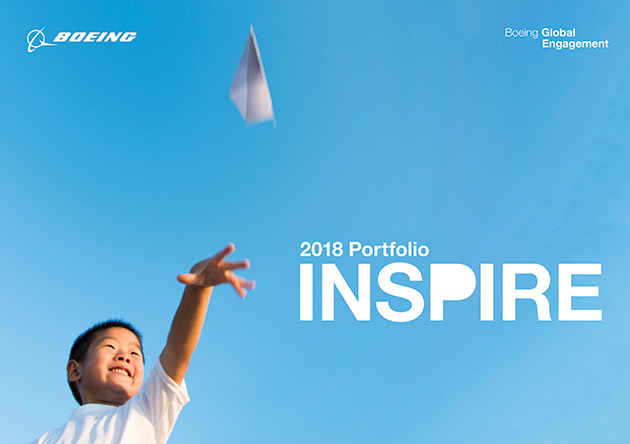 The 2018 Boeing Global Engagement Portfolio takes an in-depth look at the company’s philanthropic impact throughout the year. Within its pages are highlights of Boeing’s activities that inspire tomorrow’s innovators, support veterans and build better communities, worldwide.

Boeing is on track to surpass $200 million in total community giving in 2018, said Boeing Chairman, President and CEO Dennis Muilenburg during a keynote address to members of the Economic Club in Washington, D.C.

“That’s a significant sum and shows how our company is driving innovation, supporting our people and improving Boeing communities around the world,” he said while announcing $54 million in grants and philanthropic sponsorships to nonprofits within the U.S. and around the world.

As part of the company’s $100 million pledge to invest in local communities following the enactment of the tax reform legislation, the investments include new or accelerated partnerships with organizations that improve STEM education, enrich local communities, and offer transition and health services for veterans and their families.

The investments will help launch Boeing’s new “First to Mars” initiative, a comprehensive experiential learning framework that encourages interest in Science, Technology, Engineering and Math (STEM) and inspires the next generation to see the future in space as their future with Boeing.

Charitable dollars will also support the national scaling of innovative veterans’ health and wellness programs administered by the Tragedy Assistance Program for Survivors (TAPS) and the National Center for Veterans Services (NCVS). Funds have also been allocated for The Nature Conservancy (TNC) and TreePeople to assist with tree reforestation efforts on the U.S. West Coast following the devastating 2017 wildfire season.

“This investment is yet another example of how Boeing is putting tax reform to work,” Muilenburg said. “Already, we have expanded our 'Dollars for Doers' matching program to reward employees who give their time and resources in support of causes important to them.”

“Given that Boeing is already an exceptional supporter of the Kennedy Center, these most recent gifts are a welcome and exceedingly generous surprise,” said Deborah F. Rutter, President of the Kennedy Center. “With these gifts, Boeing has signaled its deep belief in the bright future that lies ahead as the Kennedy Center moves towards the opening of The REACH in 2019, and our 50th anniversary in 2021. Through inspired leadership giving, Boeing is a vital and valued supporter in helping the Center to realize its mission as the nation’s cultural center.”

“From Seattle to Singapore, Dallas to Delhi and places in between, Boeing and our more than 140,000 employees are building the future and inspiring the dreamers and doers of tomorrow,” said John Blazey, vice president of Boeing Global Engagement. “With the depth and breadth of our employees’ skills and passion for giving, our professional networks and partnerships, and our financial resources, Boeing drives positive and meaningful change in myriad communities around the globe.”