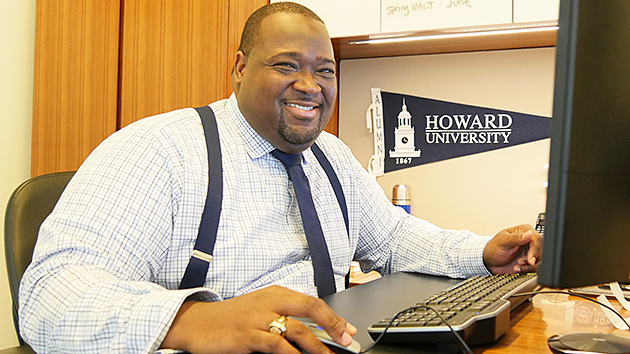 Boeing’s David Canada graduated from Howard University, one of the Historically Black Colleges and Universities that recently received monetary support from Boeing. “We never felt like we were competing against peers,” he said. “It felt like we were partners. You can’t put a price tag on that.”

When David Canada was making his final college decision, he found Howard University, a Historically Black College and University (HBCU), much different from other schools on his list.

“I would walk around campus and strangers would ask how you were,” said the chief of staff for Boeing Defense, Space & Security’s vice president of IT. “At other schools, I felt like a very small fish in an ocean. At an HBCU, you’re in a lake. It’s still a body of water, but not as big as an ocean.”

Because of the familial feel of the campus, Canada said he learned how to build genuine relationships and approach challenges with confidence and innovation. These skills were pivotal when he worked on the V-22 Osprey line as an industrial engineer solving issues like an unwieldy fuel tank installation process.

Boeing continues to rely on people with these interpersonal skills, particularly when cultivated in HBCU environments. That’s why the company is investing $6 million in the Thurgood Marshall College Fund and several HBCUs as part of its push to become an employer of choice to students graduating from these colleges.

University Relations portfolio manager Chasity Leek-Watson explained that companies compete fiercely for HBCU talent because the schools tend to have smaller classroom sizes, which allows them to give more concentrated attention to each student’s professional and personal development.

“Going to an HBCU is like going to school with family: aunts, uncles, moms, dads,” Leek-Watson said. “There are high expectations of how you represent them and the school once you graduate. You carry the legacy of those that came before you who pursued educational excellence even if there were a lot of barriers.

The term “legacy” is not a stranger to Leek-Watson. She’s the third generation of her family to attend an HBCU and the second generation to work for Boeing — her parents are engineers employed by the company, and she grew up on the Space Coast in Florida before graduating from Florida A&M University.

“Our success relies on our ability to attract and grow talent from all backgrounds and perspectives,” said Michael Ford, vice president of Global Diversity & Inclusion. “These institutions are vital sources for our pipeline, but the competition is intense since so many other companies and industries seek the same forward-thinking innovators that we do.”

Boeing’s investment will help continue creating scholarships and internship opportunities, such as the one Watson completed during her five-year MBA program at Florida A&M.

Investing in a diverse talent pipeline
Boeing’s $6 million investment in the future technical workforce through a partnership with the Thurgood Marshall College Fund (TMCF) – the nation’s largest organization exclusively representing the black community college – is intended to be spread across eight Historically Black Colleges and Universities (HBCUs).

“If you look at the number of HBCU alumni working at Boeing, you know how critical these institutions are to our pipeline and progress,” said Ted Colbert, chief information officer, board member of the Thurgood Marshall College Fund and Morehouse University graduate. “Boeing is stronger because of the skills, diversity and passion they bring.”