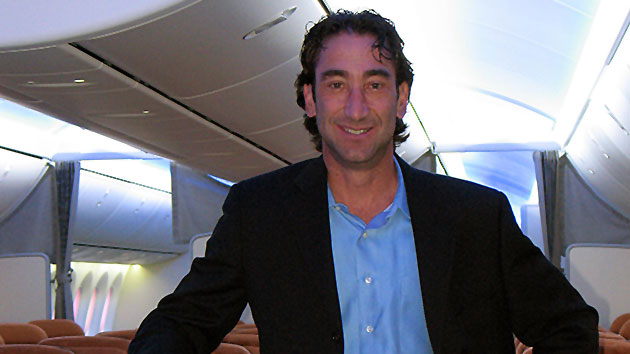 Kenneth Price, who was born with cystic fibrosis, has lived with a double-lung transplant for more than 25 years. While his disability does not define him, it has made him see life in a new light.

Director of Aircraft Valuation for Boeing Capital Corporation Kenneth Price exercises daily with the intensity of an elite endurance athlete. He plays tennis and racquetball. He bikes. He’s run marathons. Looking at him, you would have no idea Price has been living — enthusiastically — with a double-lung transplant for more than 25 years – when the median survival is only five.

Price was born with cystic fibrosis, a hereditary disease marked by gradual deterioration of the lungs and pancreas. He was diagnosed when he was one year old, but it was not until his early 20s, after bouts of infection, that his lungs began to decline the way doctors had predicted they would. By the end of that decade, he was chronically ill – no longer able to breath without bottled oxygen.

In 1992 his care team began applying to hospitals for a double-lung transplant but was always denied – his case was too risky. A year later the University of Washington (UW) Medical Center came through, and Price got his transplant — the first with cystic fibrosis put on the transplant list at UW. Within three months after surgery he had won a tennis tournament, ran a 5K and was biking regularly. Within a year he participated in a 200-mile bike race from Seattle to Portland and has since run a marathon.

“I think part of it is my inherent wiring — spoken like a true engineer,” he said. “I’m generally wired happy, and my nuclear family are all positive, supportive people. I also choose the people I surround myself with carefully. Positive people who live physically and emotionally healthy lives are ones I seek out and allow in my life.”

Another factor to his continued success and optimism, Price said, is how Boeing has been able to accommodate his “hidden” disability over the past 25 years.

“Every single position I’ve been in and manager I’ve had has been more than accommodating,” he said. “It has never been an issue in my entire career. Now, I make sure to do my part and try to make the flexibility I am given as transparent as possible to my manager and organization.”

Stories like Price’s are one of the many reasons Boeing is reframing how it talks about disabilities this National Disability Employment Awareness Month — a national campaign that raises awareness about disability. The company is moving from visible and non-visible disabilities to diversabilities, a movement to raise disability awareness and reshape conceptions of ability. This is another step toward creating an environment where talented people of all abilities can feel comfortable and do their best work.

Earlier this year, for the third year in a row, Boeing achieved a top score of 100 on the Disability Equality Index, a joint initiative of the American Association of People with Disabilities and Disability:IN. Further, last month, Boeing was recognized as a 2018 National Organization on Disability Leading Disability Employer.

“At Boeing we recognize and value employees with diversabilities,” said Jenette Ramos, senior vice president of Manufacturing, Supply Chain & Operations and executive sponsor of Boeing Employees Ability Awareness Association. “While we are making progress bringing diversity into every aspect of our business, we can do more to foster an accessible, inclusive and supportive global work environment.”