Etihad Airways is the world’s first airline to fly a passenger flight using biofuel made from desert plants grown in saltwater. The project, supported by Etihad, Boeing Research & Technology, Commercial Airplanes Environmental Strategy and several other organizations, demonstrates how fish, farming and flight come together to provide food security and cleaner skies.

“This is a significant milestone for the UAE and its key industries,” said Tony Douglas, Group CEO of Etihad Aviation Group. “Etihad is fully committed to this pioneering project, which demonstrates a successful proof of concept that is local, viable, cost-effective and sustainable.” The biofuel is blended directly with jet fuel and does not require any modifications to aircraft, engines or airport fueling systems.

Biofuel represents a significant opportunity to help the aviation industry meet goals to halt the growth of carbon emissions by 2020 and cut them to half of what they were in 2005 by 2050. Boeing works with partners around the world to develop regional supplies of biofuel. The Abu Dhabi facility is funded by the Sustainable Bioenergy Research Consortium. Managed by Khalifa University, consortium members include Etihad Airways, Boeing, ADNOC Refining, Bauer Resources, Safran and GE Aviation. 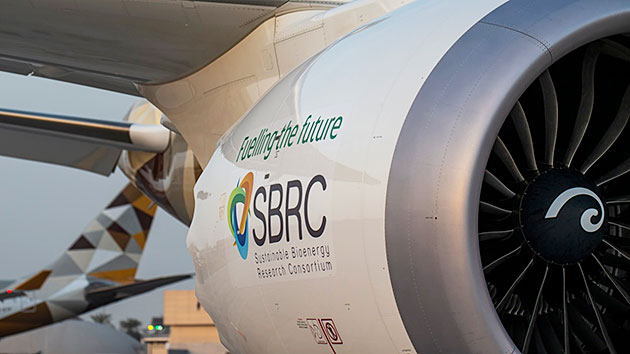 The engine of the Etihad Airways 787-9, making the world’s first flight using a blend of conventional jet fuel and biofuel grown in a desert aquaculture farm, displays the logo of the Sustainable Bioenergy Research Consortium of which Boeing is a part. 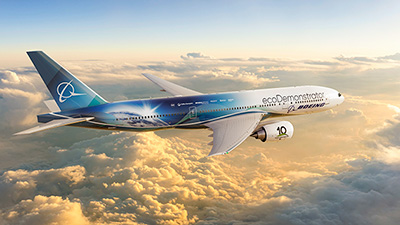