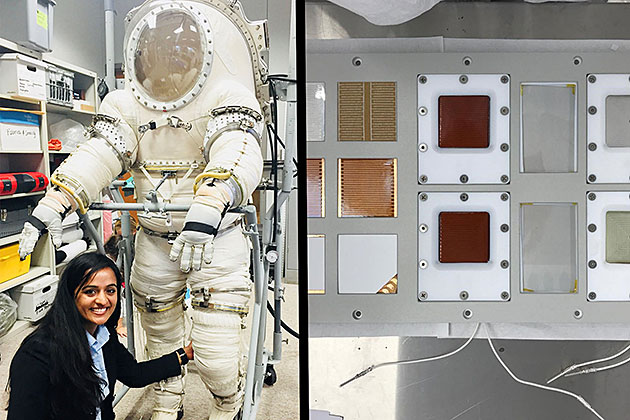 At left, Boeing engineer Kavya Manyapu works with a prototype spacesuit during her research on a new material that will better shield astronauts from dust, radiation and other hazards. The set of experimental materials at right was launched to the International Space Station on April 15 for testing.

Kavya Manyapu, a Flight Crew Operations and Test engineer, designed the material to shield astronauts from dust, radiation and other hazards when they leave the safety of their spacecraft to explore the surface of the moon and Mars. This is a different challenge than that for astronauts inside a spacecraft, where they can wear thinner garments such as Boeing’s Starliner spacesuit.

Launched April 15 aboard a Cygnus cargo spacecraft, two two-inch-by-two-inch (five-centimeter-by-five-centimeter) samples of the material were positioned outside the ISS. They will stay there for months exposed to the harsh conditions of space, including drastic temperature changes, constant bombardment by cosmic rays and a complete lack of atmosphere. In other words, all the things that a spacesuit faces during a mission.

The new material, which could be used in space habitats as well as in spacesuits, comes at a time when NASA is developing mission architectures to send astronauts to the surface of the moon within five years and to sustainably explore the moon’s surface and deep space.

The material relies on carbon nanotubes and other conductive fibers to interlock tightly in certain conditions without causing the astronauts to lose critical mobility as they move around inside their suits. During the Apollo missions, moonwalkers’ spacesuits collected lunar dust that would bind the fibers and limit their movement.

“I wanted to contribute to the future of human spaceflight, particularly in making sustainable missions on the surface a reality,” Manyapu said.

Manyapu developed the technology as part of her doctoral study in aerospace sciences from the University of North Dakota. She worked with Leora Peltz, a senior scientist at Boeing Research & Technology. Manyapu and Peltz co-wrote three patents based on the research.

“It’s an opportunity to take that one small step along the path of human spaceflight,” Manyapu said. “It’s a dream come true. Now I can dream about one day wearing a suit of this material on the moon myself.”

This is not the first time the material has faced significant tests. Leading up to its ISS mission, the material was extensively tested in a range of physical tests and environmental conditions, including a vacuum chamber. After its stay on ISS, it will be returned to Earth for examination to find out whether it has a future protecting astronauts as they explore deep space.