Boeing teams in New Orleans have moved the Space Launch System’s (SLS) two massive propellant tanks – capable of powering a Mach 23 launch - into position for the second of three major joins that make up the rocket’s core stage. That’s four-fifths of the core stage assembly.

NASA Administrator Jim Bridenstine recently announced that the moon missions will be known as the Artemis program, the follow-on to America’s Apollo missions that landed the first humans on the moon.

Boeing technicians moved the SLS’s liquid hydrogen tank into final assembly at NASA’s Michoud Assembly Facility in New Orleans last week, lifting and placing it onto stands for the process of joining it with the already mated liquid oxygen tank, intertank, and forward skirt (the forward join). The two sections are being aligned and fastened together before the process of integrating propulsion and avionics throughout the system begins.

Teams in a climate-controlled part of the facility are concurrently working on the SLS engine section, which will later be joined to the rest of the core stage. The engine section will produce 2 million pounds of thrust to send the rocket and NASA’s Orion spacecraft around the moon and to the future Gateway moon-orbiting outpost.

At completion late this year, the 212-foot tall SLS core stage will be shipped to NASA’s Stennis Space Flight Center and delivered to the agency for testing – a huge step toward NASA’s vision of returning humans to the moon by 2024. 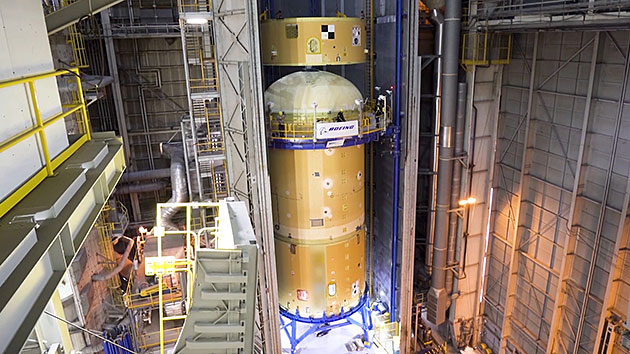 Space Launch System teams in New Orleans are working to deliver the first core stage of the rocket to NASA by the end of the year.