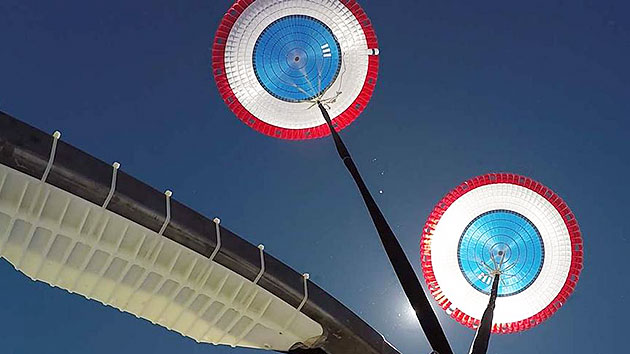 Two of Starliner's main parachutes are shown deployed during the final parachute qualification test. The third main parachute was intentionally disabled for this test.

The CST-100 Starliner passed another major test on June 24 when Boeing teammates successfully demonstrated that the spacecraft’s parachute landing system can provide a safe landing for the capsule and its onboard crew even in extreme circumstances. The test was the fifth and final required to qualify the landing system for flight.

Conducted on the U.S. Army’s White Sands Missile Range in a remote region of south-central New Mexico, the test featured a flight-sized test version of the Starliner capsule. During a nominal return from space, two drogue parachutes and three main canopy chutes will open to slow the descent of the spacecraft, followed by six landing airbags that will cushion the impact. For this test, the team introduced not one, but two, intentional failures.

“We never want a system to fail during flight, but when it comes to crew safety it’s important to know what our tolerance for failure is,” said Mike McCarley, landing system lead for Starliner. “We pulled the plug on one drogue and one main chute, and the other parachutes handled the additional pressure quite well.”

Engineers coupled the capsule to a large helium-filled balloon that ascended 40,000 feet (12,192 meters) into the lower levels of the Earth’s stratosphere, where the capsule was then released. During its four-minute descent toward Earth, the capsule achieved velocities that would occur during an actual mission.

“We saw everything we wanted to from the data we captured, and the system performed just as it should even in this extreme case,” said John Mulholland, Starliner vice president and program manager. “The entire design and test team did a great job in ensuring we successfully met the objectives and getting the capsule on the ground safely.”

The Starliner is scheduled for its first uncrewed flight-test mission to the International Space Station later this year, followed by a crewed mission. A United Launch Alliance Atlas V rocket will carry the Starliner into space from Space Launch Complex 41 at Cape Canaveral Air Force Station in Florida.

“When people ask me what my job is, I always tell them, ‘It’s to bring [Boeing astronaut] Chris Ferguson home safely,’” McCarley said. “With this test behind us, we’re one step closer to making that a reality.” 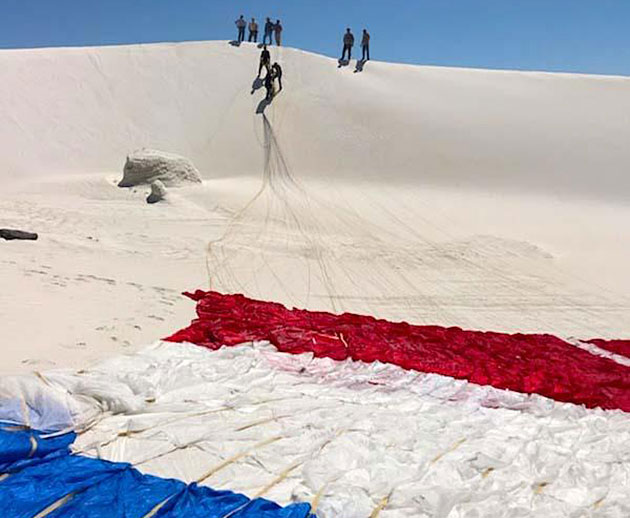 A triumphant Starliner parachute recovery team examines the landing site of one of the main parachutes on the White Sands Missile Range in New Mexico.