The first Boeing P-8A Poseidon for the United Kingdom Royal Air Force (RAF) took off from Renton, Wash. at 10:00 a.m. Pacific on July 12, marking the first flight of this inaugural U.K. P-8A.

During the 90 minute flight key testing took place before the aircraft touched down and moved to the next phase of preparation before customer delivery, installation of military systems.

UK Ministry of Defence (MOD) and Royal Air Force personnel, along with Boeing P-8 program leaders, were on hand to witness the takeoff and landing of the recently painted aircraft, number ZP801.

“This is a great milestone in the UK P-8A Poseidon’s journey to the UK, as we are one step closer to its arrival in Scotland,” said Air Commodore Richard Barrow, the senior responsible owner for the UK’s P-8A program. “The platform will enhance the UK’s maritime patrol capability with advanced, state-of-the-art technology.”

The RAF P-8A Poseidon fleet will support maritime surveillance, anti-submarine warfare and anti-ship warfare for the UK, and will increase protection of the UK’s nuclear deterrent and Queen Elizabeth class aircraft carriers.

The first of nine P-8As ordered by the UK now moves to the P-8 Installation and Checkout facility in Tukwila, Wash. where mission systems are installed and further testing happens before final delivery to the customer later this year. When the aircraft is delivered it will first fly to U.S. Naval Air Station Jacksonville for additional preparation and training by UK personnel before flying home to the UK. The RAF will take delivery of ZP801 later this year and it will move to the UK in early 2020.

The United Kingdom is one of six international customers for the P-8A Poseidon. As a direct commercial sale, India has received eight of the P-8I variant to date with four more under production. The U.S. Navy is on contract to deliver 111 with the potential of additional quantities based on the fleet’s needs. As a cooperative partner with the Maritime Patrol and Reconnaissance Program Office, Australia began receiving their P-8A aircraft in 2016 with eight delivered and four more in production; Norway will begin receiving their five P-8As in 2022; both New Zealand and South Korea have signed agreements with the U.S. Navy to purchase four and six aircraft respectively. 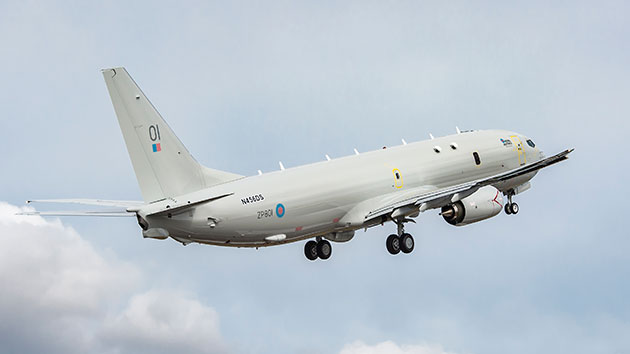 The first Boeing P-8A Poseidon aircraft for the United Kingdom lifts off from Renton, Wash., for its inaugural flight. The aircraft now moves to the P-8 Mission Systems Installation and Checkout facility where it will be outfitted with military systems and sensors, and then tested before delivery to