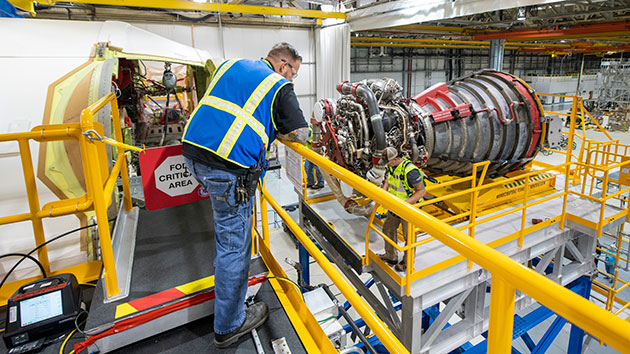 The first of four RS-25 engines has been attached at the bottom of the core stage for NASA’s Space Launch System (SLS) rocket that will power the first Artemis mission to the Moon.

Installing the engines is the final step in core stage assembly. Now that the engine is attached to the completed core stage structure, technicians will finish the installation by connecting complex systems inside the stage to the engine.  Each engine has a specific role to play in the propulsion system. In a complex combustion process, the engines will fire nonstop for 8.5 minutes, fueled by the core stage propellants, emitting hot gases from each nozzle 13 times faster than the speed of sound. That’s a lot of power to harness for liftoff.

The engines will first fire together for Green Run testing next year. Boeing is working with NASA to install tooling and systems, while training test operators at Stennis Space Center near Bay St. Louis, Mississippi, where the full core stage will undergo the Green Run ‘hot fire’ test. It’s a full systems test of the integrated Aerojet Rocketdyne engines and Boeing-built core stage. The engines are fueled by the core stage liquid hydrogen and liquid oxygen tanks.

Originally designed for the Space Shuttle program, the engines have been modified to deliver more power for the Space Launch System. Each of the RS-25s has dozens of turbine blades. Just one blade the size of a quarter coin on the high pressure fuel turbopump generates more horsepower than a Corvette engine.

The completed core stage with all four engines attached will be the largest rocket stage NASA has ever built.