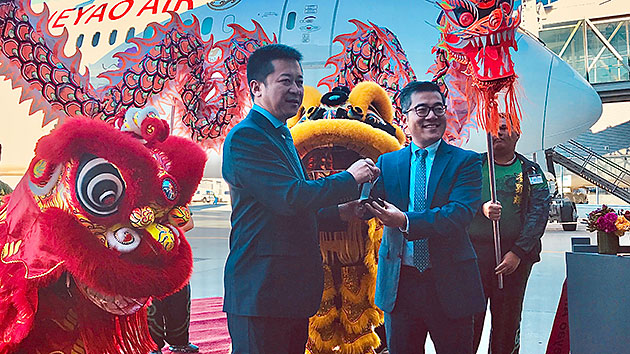 Peter Gao, vice president, Commercial Sales and Marketing for China, gives the key of the airplane to Feng Jiangtao, VP of Juneyao.

In China, the 787 Dreamliner love is strong – and now commemorated with Juneyao’s recent delivery of the 100th direct-buy Dreamliner for the country. The 787-9 features a special decal on the nose to mark the milestone. The airplane departed Paine Field in Everett, Washington for the airline’s hub in Shanghai, China.

The first Dreamliner entered China in 2013, and in six short years has gained popularity among carriers due to its fuel efficiency and unrivaled passenger experience. The airplane has opened 13 new routes to major hubs in China from all over the world that weren’t possible before the airplane entered service. More than 75 routes are operated by the Dreamliner direct to major hubs in China.

“We are honored to deliver the 100th 787 Dreamliner to China, “said Ihssane Mounir, senior vice president of Commercial Sales & Marketing for The Boeing Company. “We are dedicated to creating greater value for our customers in the country, and we look forward to continuously expanding our cooperation with China’s civil aviation community to meet future opportunities and challenges.”

For Juneyao, the Dreamliner – their sixth, with four more to be delivered – means they will be able to service Shanghai, China to Athens, Greece in mid-2020.

“We are honored to receive this special airplane,” said Wang Junjin, Chairman of Juneyao Airlines. “The 787 is playing a more and more important role in our fleet, becoming integral to our operations.”

Boeing’s Commercial Market Outlook predicts strong demand for airplanes in the region in the next 20 years. By 2038, China’s population and traffic growth will call for a boom in widebody need, and Boeing widebodies like the 777X and Dreamliner are well-positioned to complement that growth. 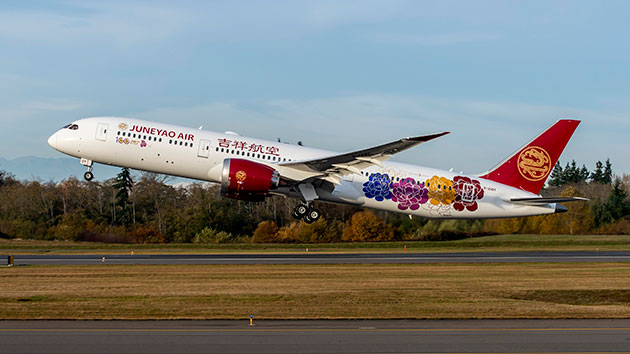 Juneyao's 6th 787-9 Dreamliner takes to the skies to Shanghai.