The event marked the first time a completed rocket stage has shipped out of Michoud since the end of the Apollo program. SLS Core Stage 1 is the largest single rocket stage ever built by NASA and its industry partners. It is the world’s most powerful rocket, evolvable and built to carry astronauts and cargo farther and faster than any rocket in history. It will launch NASA’s Orion spacecraft and heavy cargo to the moon and beyond for the agency’s Artemis missions.

Boeing is responsible for the SLS core stage, upper stages and avionics. The rollout followed several weeks of final testing and check-outs after NASA’s declaration of “core stage complete” during a December 9 Artemis Day celebration at Michoud.

Core Stage 1 traveled on NASA’s Pegasus barge to the agency’s Stennis Space Center in Bay St. Louis, Mississippi, for “Green Run” testing on the historic B-2 test stand. The hot-fire tests will run through a launch sequence that includes everything but liftoff. After that, the stage will be refurbished and shipped to Kennedy Space Center in Cape Canaveral, Fla., for integration with its upper stage and Orion ahead of launch. 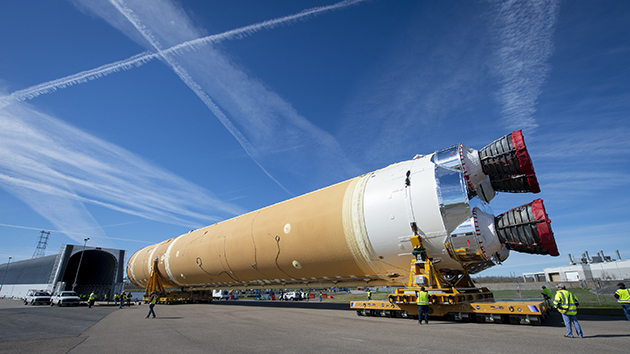