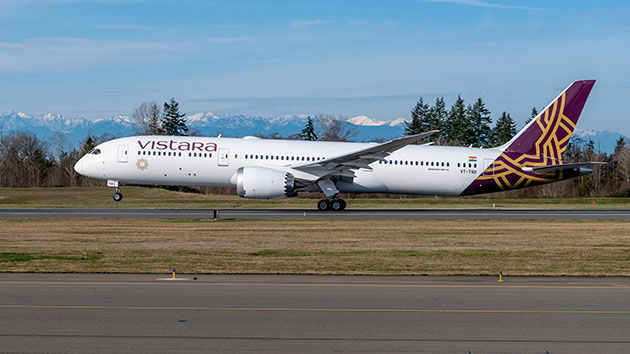 Indian airline Vistara recently marked many firsts: they just received their first 787-9 Dreamliner, which is their first widebody airplane – and it is India’s first 787-9 airplane.

The new airplane sports a unique new interior among its many amenities. Along with lie-flat business class seats and a superb premium economy section, the seats are also equipped with high definition in-flight entertainment screens and in-flight Wi-Fi connectivity. This makes Vistara India’s first airline to offer the service.

“This aircraft delivery marks a new phase of growth for Vistara and unlocks our potential to become one of world’s best airlines. The Boeing 787-9 Dreamliner is one of world’s most technologically advanced aircraft today,” said Leslie Thng, Vistara’s CEO.

Vistara, a joint venture between Tata Sons Limited and Singapore Airlines Limited (SIA), is India’s only five-star rated carrier and international airline. With their new Dreamliner, the airline plans to launch new point-to-point routes and deliver an exceptional experience to its passengers

“We are excited to have Vistara join the list of customers benefiting from the Dreamliner’s fuel efficiency and range flexibility that enables opening new routes,” said Brad Zaback, vice president and general manager for the 787 program.

In India, Boeing currently owns 100 percent of the widebody market share. Boeing’s Commercial Market Outlook indicates India is expected to grow from the eighth largest passenger market to the third largest market by the middle of the next decade.