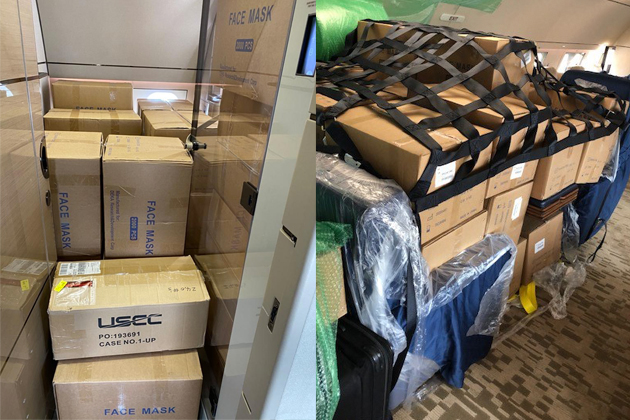 On the morning of April 15, a crew of five—three pilots, a flight attendant and a flight engineer—gathered at the airport in Gary, Indiana, and began their typical pre-flight routines. The pilots reviewed the flight plan and checked the weather at the departure and destination airports. The flight engineer reviewed maintenance logs, while the flight attendant prepared the cabin for departure. But the journey they were preparing for was different in one major way.

“On this flight, we were carrying cargo, which our aircraft never does,” said Sandra Granados, flight engineer.

The crew was about to embark on a special mission: Fly to Shanghai and return with 540,000 face masks for frontline health care workers and first responders in the U.S. It was a mission with multiple challenges that required weeks of preparation and the coordination of multiple Boeing teams including Government Operations, Boeing International, Global Trade Controls, Executive Flight Operations, Boeing Shanghai Aviation Services and Boeing Transportation, Warehousing and Logistics.

“The team behind the scenes—they are the real stars here,” said Jim Johansen, one of the flight’s three pilots. “They had a lot of work to do to get us ready, and it was all done prior to starting that first engine.”

The request arrived with the Executive Flight Operations trip planners in early April.

“Since we do not usually carry cargo, we relied on help from our Boeing China team to make sure we met all the entry requirements,” said Jean-Michel Sicaud, operations planner for non-U.S. trips. “They were instrumental in helping coordinate.”

Then there was the challenge of figuring out how to fit, and safely store, dozens of boxes of masks in a 737-700 configured for flying passengers. For this mission, Granados — a certified airframe and powerplant mechanic with almost 10 years of experience — had to learn a new skill.

“I had to get educated on loading and securing cargo,” Granados said. “Every place where we were loading cargo has a weight limit. I also needed to ensure the cargo was properly anchored so it didn’t shift during flight and damage the aircraft.”

Armed with the approximate dimensions of the boxes, Mike Wuebbling, senior manager of aircraft maintenance, and his team got to work creating diagrams of every location on the plane — even the lavatory — and how to best stack the boxes in each place. They also had to order supplies like cargo netting and anchor hooks. As the designated load master, it would ultimately be Granados’s job to ensure the boxes were secured for the return flight.

Once in the air, flight attendant Zach Gable’s job was also much different than a normal trip.

“This time, I was able to focus on the crew and making sure they got everything they needed so they could focus on being safe,” said Gable.

After departing Gary, Indiana on April 15, the flight went to Anchorage, Alaska where the crew spent the night. The next morning, they made the nine-hour trip to Shanghai to load the cargo. On the ground in Shanghai, the crew only had a small window of time to load the cargo and depart. This was due to a combination of their crew duty time limitations and quarantine restrictions in China—the flights were required to land and depart in the same day.

“As we were taxiing in we could see the cargo, and we were wondering how we were going to get all this on our aircraft,” said Neil Green, the flight’s first officer.

Chinese authorities checked the temperature and passports of the crew, then they started loading boxes, moving from the rear of the aircraft forward.

“It took us about 2.5 hours; it went by so fast,” said Granados. “It was a lot of work but there was so much adrenaline. We met our slot and departed on time and got everything done.”

From Shanghai, the flight went to Seoul where they spent the night. At 9 a.m. on April 18, the flight departed Seoul, made a fuel stop and cleared customs in Anchorage, and then arrived in Manchester, New Hampshire just after 11 a.m. ET on April 18. A total of 13,566 miles in just over 34 flight hours.

“It was truly humbling when we landed,” said Johansen. “It gave me chills. I realized this was a much bigger thing than any one of us thought.”

The crew was greeted by Dave Calhoun, president and CEO, along with New Hampshire Gov. Chris Sununu, members of the New Hampshire Congressional delegation — including Sen. Jeanne Shaheen and Rep. Chris Pappas — FIRST Robotics founder Dean Kamen and members of the media.

“It was the best feeling in the world,” Granados said. “I felt a huge sense of pride to be part of this mission and pride in our Boeing team.”

For each crew member, it was the end of an exhausting, yet rewarding mission.

“Since my wife is a nurse, it feels good knowing I was able to help someone on the frontlines like her,” said Gable.

“The team effort and the way everybody came together was extraordinary,” said Dave Wilson, the mission’s pilot in command. “It was just an incredible effort from everyone involved.”

“Our team was honored to have supported this important humanitarian flight,” said Mark Jackson, director of Executive Flight Operations. “The collaboration and support that was required from diverse business partners reflects the talent and strength of our Boeing teams.”