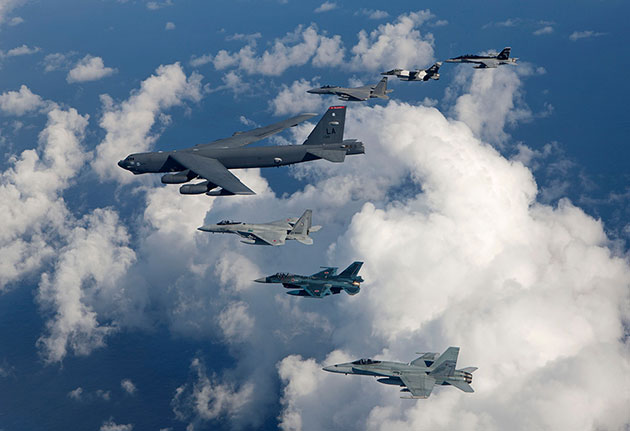 The CONECT upgrade will keep the B-52 relevant for decades to come.

Unmatched versatility has made the B-52 the backbone of the U.S. Air Force’s bombers force, and modernization efforts are keeping the aircraft relevant decades after first flight.

Key to those efforts is the Combat Network Communications Technology (CONECT) upgrade, a communications modification that offers the aircraft 21st-century situational awareness along with mission flexibility. Boeing teams recently delivered the final kit in the CONECT upgrade, completing a project that launched in 2010.

"The scale of this project is just incredible,” said Scot Oathout, Bombers program director, noting that each CONECT kit has more than 12,000 individual parts.

"Throughout the project, our Boeing team designed the kits that are sent to the U.S. Air Force for installation,” Oathout said. “This process is a great example of the ways we partner with the Air Force to seamlessly modernize the bombers program."

The upgrade acts as a framework that allows aircrew to receive intelligence, data and voice messages from multiple sources. The digital links and internet connectivity enable in-flight information sharing. All of these elements work together to improve combat capability and sustain the nation's long-range strike force.

"This modification is a massive leap forward for the technology behind the B-52," said Steven Dunn, B-52 CONECT program manager, and "will act as the foundation for future upgrades. We're not just adding new capabilities, we're ensuring the viability of the B-52 in the digital age."

With an upgraded communications system, the B-52 will remain a critical contributor to the U.S. National Security Strategy. Other modifications, including a re-engine program and radar modernization, will ensure the B-52 can continue to serve for decades.

"We're moving into the digital world with the CONECT upgrade," Dunn said. "But I can't wait see what happens next for the B-52. This is a jet with a legacy."