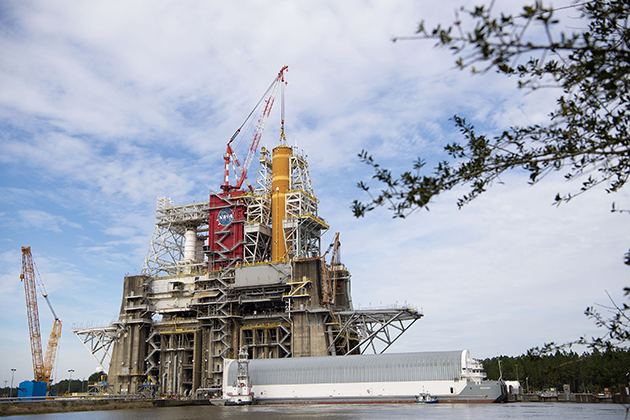 Test teams have powered up NASA’s Space Launch System core stage in its flight configuration with the stage controller for the first time at Stennis Space Center. Avionics power-on is one of the most critical tests in the series known as “Green Run.”

More than 40 avionics boxes inside the forward skirt, intertank and engine section of the 212-foot core stage are connected to various sensors attached to the structure and to three redundant flight computers. The boxes control numerous aspects of the rocket’s operation, and will provide launch crews everything they need to communicate with, command and control the rocket during liftoff and ascent.

A preview of that launch will happen later this year during hot-fire testing in NASA’s B-2 test stand at Stennis, with the strapped-down core stage firing its four Aerojet Rocketdyne RS-25 engines for eight minutes without actually leaving the ground.

After a week of preparation, the test team took about a day to set up and turn on all of the avionics components in sequence. After all units were successfully powered on, teams from various engineering disciplines – including propulsion and hydraulics – came in to test their respective avionics components to ensure they were working properly.

“We had to charge the batteries to prepare it to run on its own, turn on the flight computers and inertial system, check out the propellant sensors, turn on the cameras and sensors, and check controls,” said Paul Wright, Green Run test manager for Boeing. “Once we had slowly powered everything up and checked the health and status of each box, we powered back down and started to prepare for the next test.”

Successful completion of this testing ensures everything is “go” for the upcoming wet dress rehearsal, when cryogenic liquid hydrogen and liquid oxygen are introduced into the system for the first time. That test is the last major test prior to hot fire. After that, the core stage will be refurbished and delivered to Kennedy Space Center in Florida, where it will be integrated with the Orion spacecraft for a late-2021 launch of the uncrewed Artemis I mission around the moon. 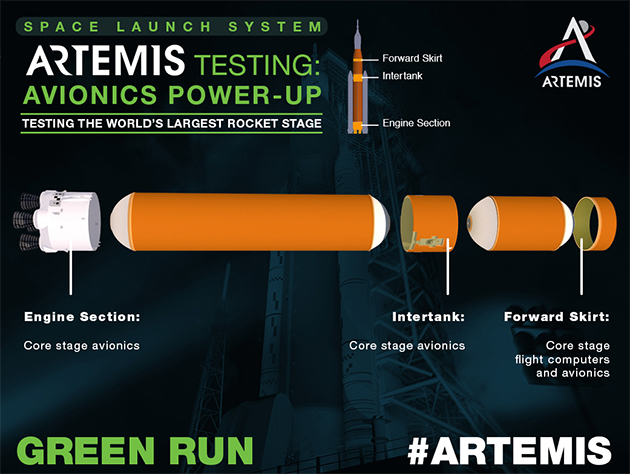