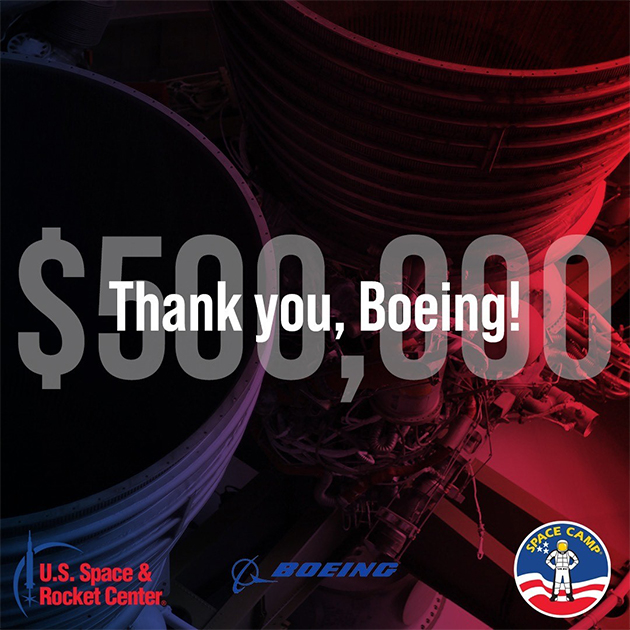 Boeing has made a $500,000 leadership gift to the U.S. Space & Rocket Center’s Save Space Camp campaign. Launched Tuesday, July 28, the campaign is seeking to raise a minimum of $1.5 million to sustain operations of the museum and to be able to reopen Space Camp in April 2021.

“We understand the unprecedented economic hardship the COVID-19 pandemic has caused educational institutions all across the country,” said John Shannon, Vice President & Program Manager for Space Launch Systems at Boeing. “The U.S. Space & Rocket Center is a cherished institution that has inspired generations of future scientists, engineers, pilots and even astronauts – many of whom now call Boeing home. With today’s investment, we proudly stand alongside the Center – throughout this pandemic and beyond – as we work towards our shared goal of making Space Camp an even better, brighter, more inclusive experience for our future innovators.”

“I am awed and grateful for the generous support from Boeing for this vital campaign,” said USSRC CEO and Executive Director Louie Ramirez. “This has been a devastating season for the Rocket Center and Space Camp, but our family of supporters have given us hope for the future. Boeing has been a longtime and important supporter of the work we do. They understand the role the Rocket Center has in sharing the work of Huntsville’s aerospace community and in Space Camp’s unique role in inspiring its future work force. We thank them for this clear and profound statement of support.”

On March 13, 2020, the Rocket Center closed in keeping with Alabama health orders intended to combat the surge in coronavirus cases. The museum reopened in late May, but with far fewer than normal visitors. Space Camp did not reopen until June 28, and then with only 20 percent of its usual attendance. With limited admission from international students and school groups this fall and winter, Space Camp will again close for weeklong camp programs in September.

These ongoing challenges have meant the devastating loss of two-thirds of revenue. In May, the Rocket Center laid off one third of its full-time employees and was unable to employ an additional 700 part-time employees who typically work in all areas of Space Camp and the museum. The majority of the remaining full-time employees have been furloughed since April.

With donations from more than 6,000 people and corporations around the world, the Save Space Camp campaign had reached more than $600,000 in three days. Boeing’s donation adds a transformative push to the campaign, bringing the amount to more than $1.1 million.

The Rocket Center is continuing to ask for support for the campaign. Any amount over the $1.5 million goal will be used to offset losses due to the COVID-19 crisis. For more information and to make a donation, visit savespacecamp.com.