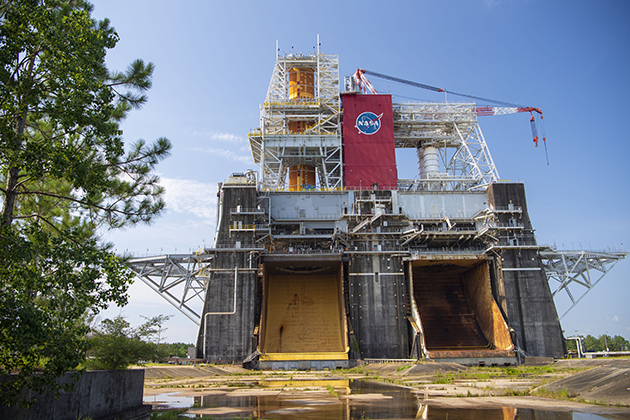 A photo from the flame-trench side of the B-2 Test Stand at NASA’s Stennis Space Center in Mississippi shows the first core stage for NASA’s Space Launch System (SLS) rocket installed for Green Run testing.

The Boeing and NASA team testing the core stage of NASA’s first Space Launch System (SLS) rocket has completed checks of the rocket’s command-and-control operations and ability to hold safe helium or nitrogen gas without leaks.

The evaluations comprised the fourth in a series of “Green Run” tests at the agency’s Stennis Space Center in Mississippi.

“This rocket is operating as designed, and we’re collecting data that validates our models,” said Boeing SLS Green Run Test Director Mark Nappi. “A lot of difficult challenges are behind us, and we’re progressing well.

“Next, we’ll work with [engine provider] Aerojet Rocketdyne to test the thrust vector controls and related hydraulic systems,” Nappi added. “After that, we’ll run a simulated launch countdown and wet dress rehearsal before firing the engines for up to eight minutes.”

Essential personnel at Stennis are following procedures to prevent the spread of COVID-19, including masks, physical distancing and regular hand-washing. Other team members have been supporting via telework.

“We are methodically bringing several complex systems to life and checking them out during the first seven tests,” said NASA SLS Stages Manager Julie Bassler. “Then it is showtime for the eighth test, when we put it all together and fire up the rocket’s core stage, just like we’ll fire it up for the Artemis I launch to the moon.”

Following the hot-fire test currently anticipated in October, the core stage will be refurbished and shipped to Kennedy Space Center, Florida. There, it will be integrated with the other components of the rocket – including the United Launch Alliance-built Interim Cryogenic Upper Stage – and the human-rated Orion spacecraft.

NASA is targeting launch on the uncrewed Artemis I mission around the moon in late 2021.