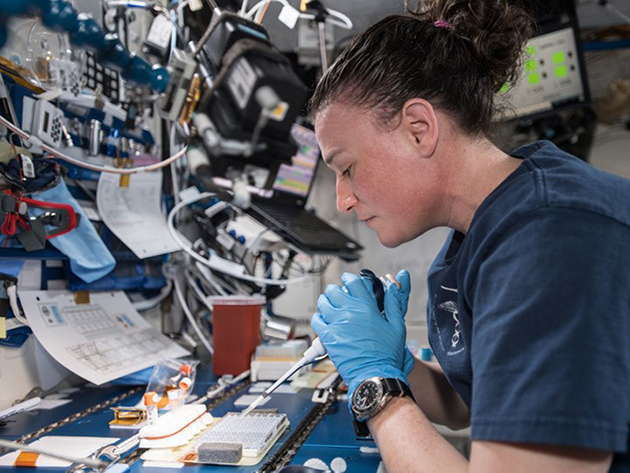 Humanity’s only space-based laboratory may play a key role in our planet’s ongoing battle against cancer. The International Space Station (ISS) provides a microgravity environment conducive to analyzing the behavior of human cells. Boeing and the ISS U.S. National Laboratory have partnered with Kernal Biologics to launch a study of potential leukemia therapies to the ISS on Oct. 2.

Kernal Biologics will leverage the capabilities of Earth’s one-of-a-kind orbital lab to test what could be a disruptive drug platform: carefully designed molecules called messenger RNA (mRNA) that prompt the body to create its own defense against disease. The company says the concept behind mRNA therapeutics holds promise in the development of curative immunotherapies for cancers with no satisfactory method of diagnosis or treatment – and even for viral illnesses such as COVID-19.

The Cambridge, Massachusetts-based startup’s ISS experiments will test mRNA molecules in both healthy human cells and leukemia cells to determine which molecules most successfully target and attack cancer cells.

“The ISS has the ability to dramatically improve quality of life in space and on Earth,” said Boeing ISS Vice President and Program Manager John Mulholland. “By extending laboratory access to researchers, scientists and change-makers who use it to enhance products and business models on Earth, partnerships like this really tap the full potential of the station.”

“The main goal of the study is to take advantage of the microgravity on the International Space Station,” said Yusuf Erkul, co-founder and president of Kernal Biologics. “We look forward to using the data we get to develop safer and more effective medicine for cancer patients”.

The experiment will launch aboard Northrup Grumman’s Cygnus spacecraft and will be performed by astronauts living aboard the ISS in the coming months. Results will bring Kernal Biologics one step closer to clinical trials for this potentially game-changing drug.