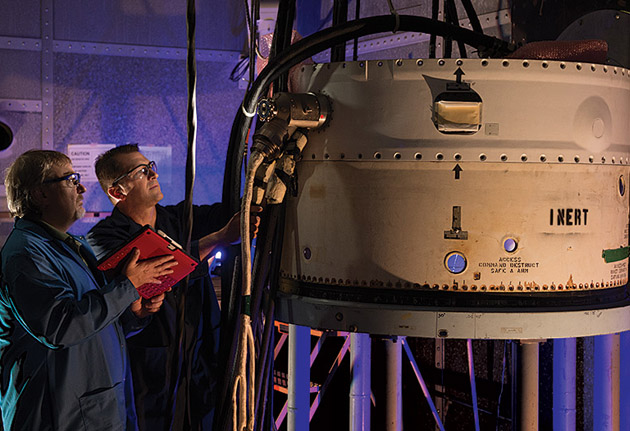 Technician Gene Knott, left, and engineer Rick Kowach monitor a section of the intercontinental ballistic missile in preparation for testing with the large flash x-ray, a machine that can simulate a radiation event in Little Mountain Test Facility's radiation lab.

The U.S. Air Force’s Minuteman III Systems Directorate recently gave the Boeing team at the Little Mountain Test Facility its second consecutive performance rating of 100% for outstanding facility operations and maintenance work. Their efforts resulted in multiple deliveries to the Air Force significantly ahead of schedule.

From March 2019 to February 2020, the team delivered critical operations and maintenance manuals and standard operating procedures between one and six months early. In addition, they realized considerable cost-savings for the Air Force stemming from upgrades and enhancements to key test equipment, facilities and processes.

“This is the culmination of the efforts of a ‘team of teams’ that gets things done,” said Joe Clark, project manager for the data delivery program. “Our engineering, support and data teams epitomize excellence – and that’s reflected in our performance.”

Boeing operates and maintains the Little Mountain Test Facility for the Air Force at Hill Air Force Base, Utah, and has supported operations at the site, including radiation effects, electromagnetic effects, shock and vibration, and other testing environments, for more than 45 years.

“We place a big emphasis on working closely with the Air Force to constantly seek out opportunities for improvement,” said Kelly John, program manager at the Little Mountain Test Facility. “That’s a big reason for our ratings and why we’ve been entrusted to carry out this mission for so long.”

The state-of-the-art facility is dedicated to testing operations to ensure that the Boeing-built Minuteman III intercontinental ballistic missile weapon system and other priority U.S. Department of Defense and Department of Energy programs, military systems and aerospace products, remain ready and operational under extreme and adverse conditions.