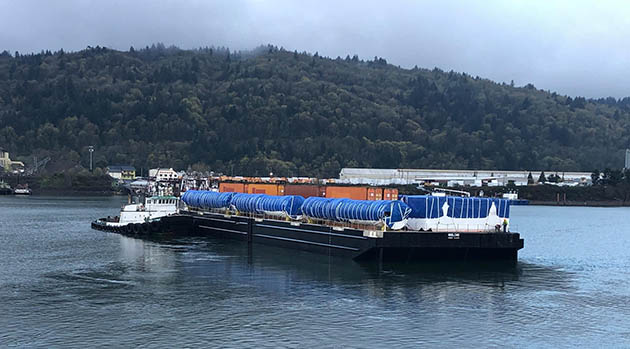 Silos and silo interface vaults depart by barge to Swan Island, Oregon, for a multiday journey. The barge travels along the Columbia River to the Pacific Ocean and docks in Valdez, Alaska. The delivery is then trucked to Fort Greely, Alaska.

The silos and vaults will be emplaced in a missile field at Fort Greely that is used to house and maintain the GMD system’s ground-based interceptors that defend the U.S. against long-range ballistic missile strikes.

“These silos and silo interface vaults provide the infrastructure needed for future ground-based interceptors,” said Debbie Barnett, program director for GMD. “We’re proud to keep delivering in support of missile defense as the GMD system lead for more than 20 years.” Boeing has designed, produced, integrated, tested and sustained all components of the GMD system to enhance its missile defense capabilities against a variety of threats since 1998.

The views expressed are those of The Boeing Company and do not constitute an endorsement by the Missile Defense Agency.