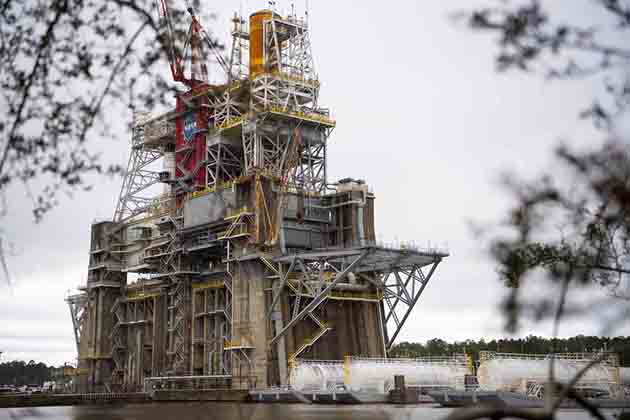 Six propellant barges next to the B-2 Test Stand at NASA’s Stennis Space Center in Mississippi delivered more than 733,000 gallons of liquid hydrogen and liquid oxygen to the core stage for NASA’s first Space Launch System rocket as part of the seventh test in the Green Run test series.

Boeing and NASA conducted the wet dress rehearsal, the seventh test of the Space Launch System rocket core stage Green Run test series, on Dec. 20. The mist around the stage in this video is the propellant boiling off during the test. The next time the propellant tanks are filled will be for a hot fire test of the stage’s four RS-52 engines.

The Boeing-built SLS core stage loaded 733,000 gallons (nearly 2.8 million liters) of supercooled liquid hydrogen and liquid oxygen during the Wet Dress Rehearsal conducted at NASA’s Stennis Space Center in Mississippi. The vehicle performed extremely well and no leaks were evident in the propulsion system. Following data review, the stage has been determined ready to proceed to the eighth and final test in the series – hot fire – this month.

Each “Green Run” test builds on prior tests of the integrated core stage tanks, valves and ducts, RS-25 engines, flight computers and other avionics. Together, they verify the core stage’s readiness to be shipped to Kennedy Space Center for final processing and integration before launch on the Artemis I uncrewed mission around the moon.

On Dec. 5, engineers powered up the stage to start testing. They successfully conducted initial propellant loading on Dec. 7. While performing operations to load liquid oxygen, data showed the temperature of the propellant was warmer than planned, and the NASA and Boeing team paused the test to take a closer look at the data. They identified processes and equipment that could be modified to keep the liquid oxygen at the proper temperature during delivery to the stage. The team implemented the changes while Stennis personnel replenished propellants and other commodities needed to run the full wet dress rehearsal.

On Dec. 20, full loading took place, including periodic replenishing as some of the propellant boiled off. The insulated tanks pressurize and maintain the liquid hydrogen at minus 423 degrees Fahrenheit (minus 253 Celsius) and the liquid oxygen at minus 297 degrees Fahrenheit (minus 183 Celsius). In response to that dramatic temperature decrease, the tanks shrink approximately 1 to 6 inches (2.5 to 15.2 centimeters) in length and diameter during fueling. Every connection to the tanks is designed to accommodate that change.

“The core stage, stage controller, and software performed to plan as the core stage was fully loaded with propellants and demonstrated a two-hour hold, and was drained,” said Boeing SLS Green Run Test Director Mark Nappi.

“We obtained structural and thermal environmental data, verified confidence in the cryogenic storage, conducted avionics and functional systems checks, and practiced procedures that will be used during the upcoming hot-fire test,” Nappi added.

The end of the test was automatically stopped a few minutes early due to timing on a valve closure. Subsequent analysis of the data determined the valve’s predicted closure was off by a fraction of a second

“The hardware, software, and stage controller all performed properly to stop the test,” said Nappi. “The team has corrected the timing and reviewed the data, and we’re ready to proceed.”

Hot fire will be a visually and aurally exciting demonstration broadcast live on NASA TV. It will include a full avionics power-on; tank loading and pressurization; multiple countdown holds; and a transition to internal power before the RS-25 engines are fired for up to eight minutes to represent the entire launch and ascent phase. The B-2 test stand will produce 90,000 gallons of water per minute during the hot-fire test for vibro-acoustic suppression and deflection.

After hot fire is complete, the SLS team will review terabytes of generated data. Boeing and engine provider Aerojet Rocketdyne will check and refurbish the stage, remove the test sensors and prepare it to be removed from the stand and barged to Kennedy Space Center.

“Even while working under pandemic restrictions and stopping work for five hurricanes and a tropical storm, NASA and Boeing have made tremendous progress on Green Run testing,” said John Shannon, Boeing vice president and program manager for SLS. “All of us look forward to hot fire with great anticipation – and even more to delivery for processing, integration, and launch on Artemis I in November 2021. We are doing our utmost to ensure a safe, human-rated rocket that will serve NASA for decades of deep-space exploration and discovery.” 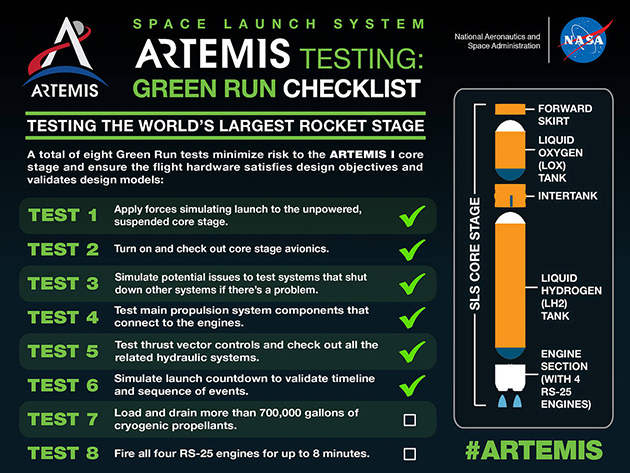 The core stage Green Run test series of NASA’s Space Launch System (SLS) rocket is underway, bringing the core stage flight hardware to life for the first time. The test series will culminate with a “hot fire” as all four RS-25 engines fire simultaneously for up to eight minutes.