NASA and Boeing have completed Starliner’s last parachute balloon drop test ending a reliability campaign that will help strengthen the spacecraft’s landing system ahead of crewed flights to and from the International Space Station.

The campaign, developed by both Boeing and NASA, used six balloon drop tests of a Starliner test article to gather supplemental performance data on the spacecraft’s parachutes and landing system. Each drop test focused on a different set of adverse conditions and used pre-flown parachutes to evaluate reusability margins for future missions.

Starliner is the first American-made orbital crew capsule to land on land. The spacecraft uses a series of parachutes and airbags that deploy at specific altitudes allowing Starliner to touch down gently in the desert of the western United States. NASA also will use the data gathered from the parachute testing to model Starliner parachute performance in different mission scenarios.

During nominal landings, Starliner uses two small parachutes to carry off the spacecraft’s forward heat shield and expose critical hardware needed for the rest of the landing system sequence. Starliner then deploys two drogue parachutes to slow and stabilize the capsule before three small pilot parachutes pull out the spacecraft’s three mains. The three main parachutes continue slowing Starliner’s descent for a safe and soft touchdown supported by the vehicle’s landing airbags.

“Our philosophy has always been testing the system hardware together to see how all the elements interact,” said Starliner landing system lead at Boeing Mike McCarley. “Our vehicle can’t fit in an airplane, so the only way we can lift a test article high enough to simulate an entire landing system sequence is with very a large balloon.” 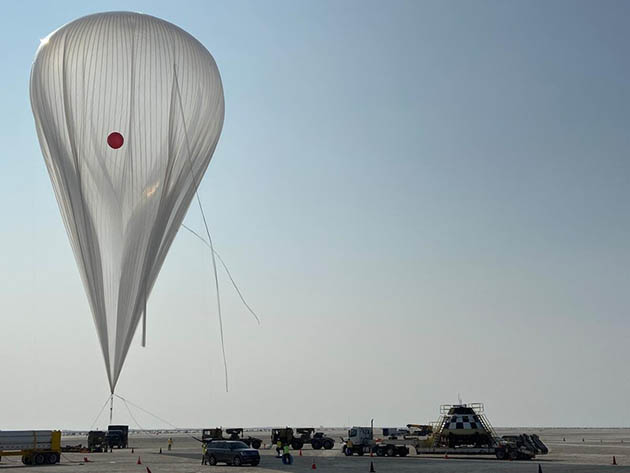 A Starliner test article prepares to mate with a high altitude balloon ahead of its final parachute reliability drop test at White Sands, NM on Sept. 19.

Test teams first prevented one of the vehicle’s forward heat shield parachutes from deploying, but as intended, the heat shield separated successfully without impacting the rest of the landing sequence events.

The test team then prevented one of Starliner’s drogue parachutes from deploying requiring the Starliner test article to ride roughly 10,000 feet under a single drogue parachute that had already been flown twice. Starliner’s three main parachutes performed within the needed limits based on the scenario, despite the higher loads and having been flown four previous times. These additional data points will be used to further validate parachute performance models.

“Parachute systems are inherently complex,” McCarley said. “These are chaotic events by nature. You could do the same test over and over again and see slightly different results. That’s why consistency in data collection is so important.”

Boeing will further improve its main parachute margins by reinforcing and increasing the strength of certain suspension lines within each canopy. These lines are held taut during early stages of deployment and perform a reefing function that allows Starliner’s mains to inflate in stages to manage loading on the spacecraft and the parachutes.

“By increasing the strength of their material and attachment points, we are improving system reliability with only minor adjustments,” said Dan Niedermaier, Starliner’s flight test manager. “As our landing system continues to execute successfully, Boeing is committed to developing the safest orbital crew capsule possible and this supplemental testing is helping us achieve that goal.” 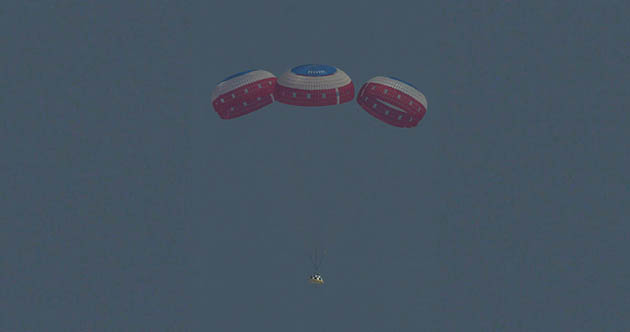 Boeing and NASA will continue collecting data on Starliner’s parachutes through the spacecraft’s second Orbital Flight Test ahead of crewed flights beginning in 2021, but the test phase utilizing high-altitude balloons is now complete.

“This last balloon drop is bittersweet for many of us,” Niedermaier said. “It marks the end of a valuable test series that took hundreds of people working very hard to execute. We couldn’t be more pleased with the results and grateful to our NASA customer for partnering with us on this campaign.”

NASA’s Commercial Crew Program is working with the American aerospace industry as companies develop and operate a new generation of spacecraft and launch systems capable of carrying crews to low-Earth orbit and to the space station. Commercial transportation to and from the station will provide expanded utility, additional research time and broader opportunities for discovery on the orbital outpost. 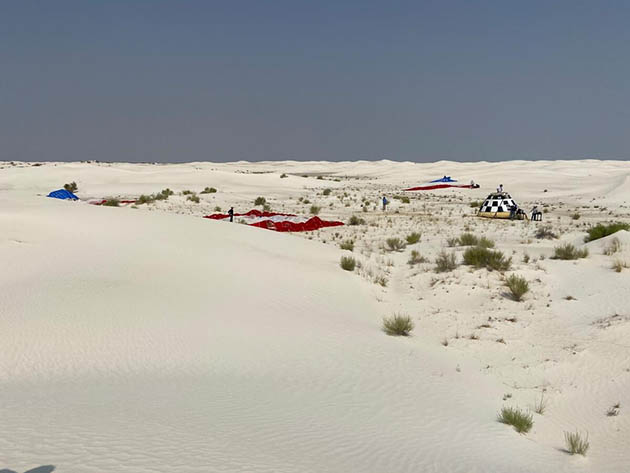