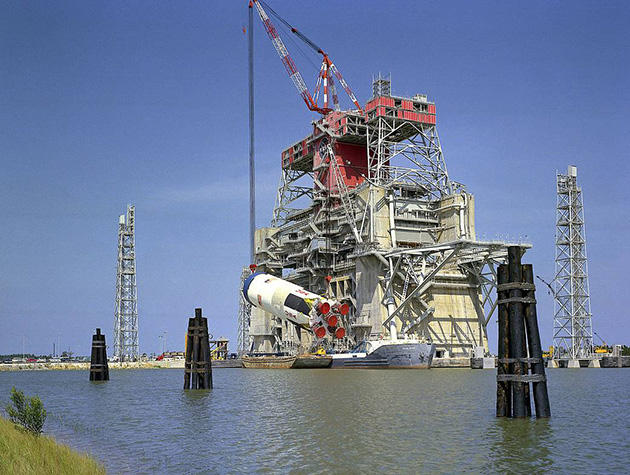 NASA conducted hot-fire testing on the B-2 Test Stand, for the Saturn S-IC-T stage, beginning in 1967. This photo shows the stage being lifted into the stand for testing in 1968.

Anchored to the ground with 144 feet (43.9 meters) of steel and concrete, the 350-foot-tall (106.7-meter) B-2 Test Stand at NASA’s Stennis Space Center in Mississippi has added some serious muscle since its Apollo days. It’s been beefed up to handle the powerful Space Launch System, or SLS, core stage hot-fire testing planned this month.

Previously used to support testing for the Saturn and Delta IV rocket programs and the space shuttle program, the B-2 stand and its network of fire suppressant and fueling systems have since been renovated to handle the larger and heavier Boeing-built core stage.

“At the start of the SLS program, visitors to Stennis were met with rusted steel and outdated components at the B-2 site,” said Michael Wood, Boeing systems engineer for the core stage Green Run test series. “Now, it’s modernized, stronger and better than ever, all for a new era of human spaceflight.”

Some of the enhancements NASA incorporated for the SLS testing include:

“The way we’re building and testing the SLS core stage is unique, so we needed to modify the B-2 stand to meet those unique vehicle requirements,” Wood said. “We’ve been able to access nearly all areas inside and outside the core stage while it’s in the stand, which has been key for performing both planned and contingency-type work.”

A total of 12 Saturn flight stages were tested on the B-2 stand from April 1967 to October 1970, enabling the Apollo 9 through Apollo 17 missions to the moon, as well as science missions.

The space shuttle Main Propulsion Test Article, consisting of an external tank and three main engines linked together with a simulated shuttle orbiter, was tested on the B-2 stand from April 1978 through January 1981.

Ongoing SLS core stage testing on the B-2 will serve to certify the current stage, as well as the additional core stages Boeing is building at NASA’s Michoud Assembly Facility in Louisiana. It will then host testing of the Boeing-designed and -built Exploration Upper Stage, which will provide an even more powerful SLS rocket for deeper exploration of space. 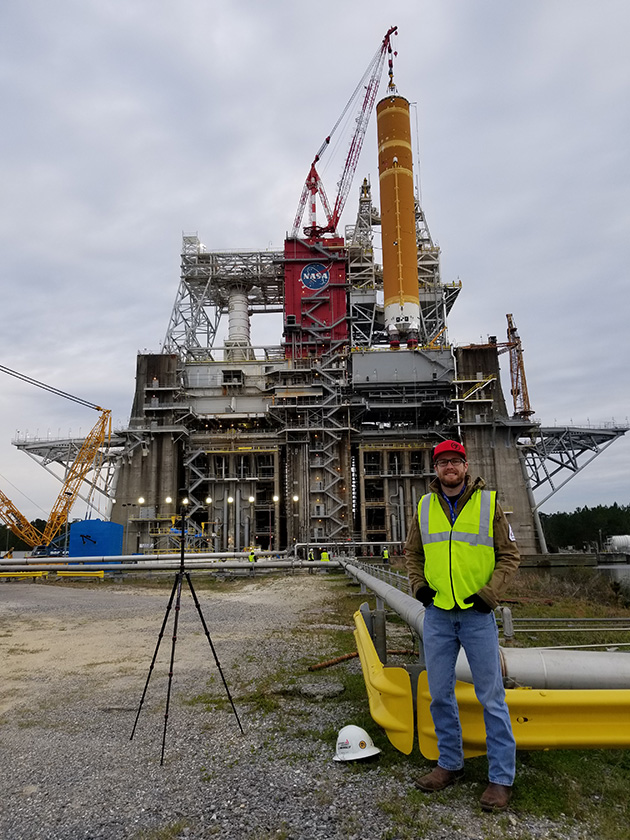 Today, the upgraded B-2 stand is ready to usher in the next era of human spaceflight, built for the more powerful NASA SLS rocket, said Boeing engineer Mike Wood. This photo was taken before Boeing implemented COVID-19 pandemic safeguards.